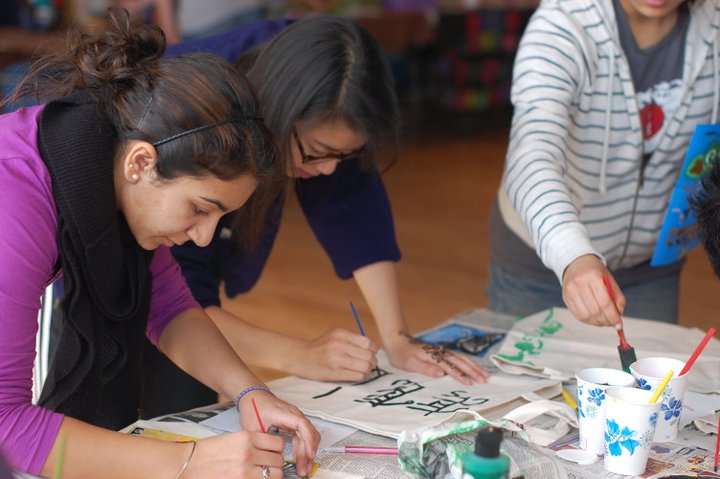 In anticipation of Earth Day last Friday, April 22, Greenfire and other student organizations organized a nine-day series of events to celebrate Earth Week 2011.

Beginning Sunday, April 17 with a vegetarian potluck and ending with documentary film director Chris Paine’s speech in the Memorial Chapel Tuesday, April 26, the activities gave students and community members alike numerous chances to participate in environmentally-aware events. Screenings of environmental documentaries, special yoga classes with live drumming and an environmentally-themed art opening in the Warch Campus Center all took place over the course of the week to raise environmental awareness.

In addition to the excitement of Earth Week, Greenfire also was notified on Earth Day that The Upper Midwest Association for Campus Sustainability had announced that Lawrence University won first place in their Campus Energy Challenge.

Designed to curb heat and electricity usage, the UMACS Campus Energy Challenge determined the winning university based on the greatest overall energy savings per capita during the month of February. Out of seven other Midwestern universities, Lawrence placed first with an overall energy reduction of 12.86 percent during February 2011, according to the UMACS Campus Energy Challenge results.

Greenfire co-president Patrick Miner discussed the group’s numerous strategies to help reduce energy and heat usage during February: “We campaigned for students to use less energy by keeping their windows closed, insulating their doors and windows, powering down their computers, shutting off lights and also cutting down on waste — which in turn leads to lower energy usage in trash management.”

Greenfire promoted the whole month of February as their first annual Waste Reduction Month, subsidizing a discount at the Café for students who brought their own reusable coffee mugs and leading Lawrence’s participation in Recyclemania, according to Miner. The group’s efforts paid off with the announcement of the Campus Energy Challenge win.

Unfortunately, Appleton’s weather brought back a taste of February’s snow Tuesday, April 19, forcing many of the Earth Week events indoors. Greenfire co-president Sophie Patterson mentioned that the planned outdoor dance party featuring live music for Friday, April 22 had to be cancelled due to weather, but that Saturday’s Earth Day celebration in the Warch Campus Center had a decent turnout regardless.

“At least a couple hundred people stopped by throughout the day,” said Patterson. She continued, “The main difference between this year and past years is that we advertised the event to the Appleton community as well. A decent number of Appleton residents attended, even though there were numerous other Earth Day events happening around town. We hope this number will continue to grow.”

Earth Week also saw another opening of the eco-conscious Magpie Thrift Store. Patterson originally launched the store — which opens for a few days at a time during the term — through Greenfire in collaboration with SEGA, but there has been enough interest to launch the store as a completely separate student organization for next year.

“We’ve seen a rapid increase in donations,” said Patterson. “I’ve overheard conversations in which a student responds to a compliment on their outfit with, ‘I got it at the Magpie!'”

Miner agreed, noting that the Magpie Thrift Store “has been a huge success so far.”

Despite the inclement weather, Earth Week turned out well for the most part. Patterson added, “We’ve been joking that we should schedule everything indoors next year and have sun sites, so that the event will get moved outdoors in the small chance that the weather is nice.”