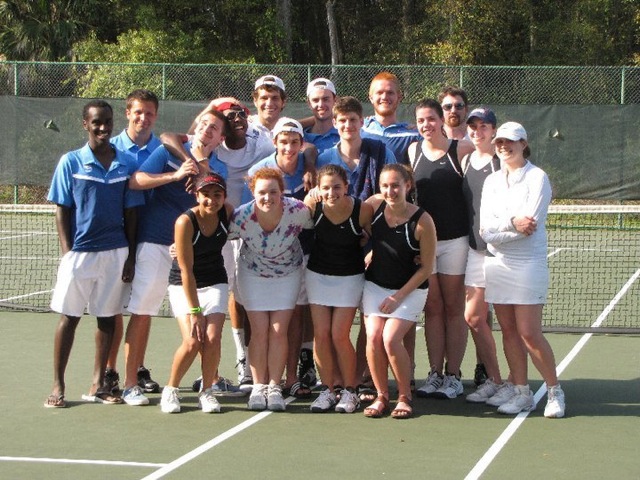 The Lawrence University men’s tennis team was scheduled to play Ripon last Saturday, but the match was rained out. The match was rescheduled for this Saturday, April 30 at 2 p.m. on the Lawrence home courts. The Vikings will also be playing two additional conference matches April 29 and May 1 against Illinois College and St. Norbert’s, respectively.

The Viking men’s tennis team currently holds a record of 4-11 due to an incredibly tough schedule early in the season, followed by a few conference losses. Although the season has been rough, senior captain Roy Wimer notes that the team’s biggest strength is a small phrase, simply stating “we shall overcome.”

He continued to explain the situation: “We have been through a lot of adversity as a team this year. The positive that has resulted from this is that in our difficulties, our small group of guys has grown closer as friends and stronger as a unit.”

When asked what the team’s biggest struggle was this season, Wimer stated, “Our biggest struggle this year has been the team’s transitory nature. Guys were coming and going in the beginning of the season and we didn’t really know who we were as a team. However, since our trip to Florida and subsequent matches in Orlando, I feel like our team has solidified and we have found our identity; we are a team with guys that are proving themselves.”

On a similar note, sophomore Jason Dunn remarked, “Coming off of a great season last year and losing half of our team, it’s hard to readjust.” The men’s tennis team currently consists of six players, the absolute minimum in order to compete in the usual six singles matches and three doubles matches.

Wimer also suggests that the youth of the team sets them apart from their competition: “We are a young team. As the only senior, I have had the unique opportunity to lead a great group of guys, but what has been more rewarding is seeing the younger guys on the team mature and grow into leaders themselves.” Dunn also noted, “we have talent but are lacking experience. Everyone has gained a lot more experience throughout the year, though, which will make us a stronger team in the future.”

So, how will the Viking’s tennis season turn out? It’s a tough call with three impending conference matches, but Wimer is optimistic, saying, “Our last match of the year is against St. Norbert here at Lawrence. Although this has been a ‘re-building’ year, our team is one win against St. Norbert away from making the conference tournament and placing among the top 4 in the Midwest Conference. We can’t do it alone, however. We need the support of the student body to come out Sunday, May 1 [at 12 p.m.] and cheer us on.”

Well, there it is from the mouth of our fellow classmate: The Lawrence University men’s tennis team will be playing three extremely important matches this weekend and need our support! For those of you who are hanging around during reading period, take a break from studying — or other activities — and attend some tennis matches in order to send our boys to the Midwest Conference Championships!