Connies and athletes united by a common lifestyle

When you see a group of students walking around campus sporting t-shirts and sweatpants, chances are you’re looking at a group of athletes. But don’t be turned off by their casual garb or pack-like mentality; it’s easy for athletes to get swept up into the world of sports that I like to call “gymnado.” 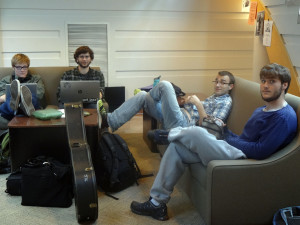 Walking through the doors of Alexander Gymnasium is kind of like walking into a bomb shelter. The thick, unforgiving cement slab walls create the illusion that you’re walking into an impregnable fortress. Yet despite the gloomy atmosphere and mazelike stairways, for Lawrence athletes, Alex is home.

When you go away to college, there is a lot of talk about “finding your niche.” Some people join sororities or fraternities, clubs or rely on their residence halls to find a community where they are accepted. For athletes, this niche is easy to find: It’s your sports team.

As a Lawrence athlete, I’ll admit that our recent records aren’t, well, stellar. We’re a small school and our athletes really do prioritize academics before sports. But even though we aren’t always top of our Conference, I don’t know a single athlete who would quit sports because of a losing record.

Being an athlete is like having instant friends, or at the very least finding people who have to tolerate you. It’s a sports cliché that a team is like a family; even if it’s dysfunctional, you have to stick with your family.

Walking into Andrew Commons, it’s pretty apparent which tables are made up of athletes. Teams returning from practice are usually the ones wearing sweatpants, t-shirts and adorned with icepacks Saran-wrapped to their extremities.

While athletes consider this perfectly normal garb, I often over hear non-athletes speculating about injuries, icepacks or “how some people can leave their rooms dressed like that.” To me, this all seems normal. But observing campus, I’m forced to accept that there is an invisible divide between athletes and the rest of campus; more specifically, the Conservatory.

While there are some crossover students who excel in both sports and music, for the most part, these two groups don’t overlap. On the surface, it seemed like an obvious divide. But upon closer inspection, I concluded that, although our techniques are drastically different, the mindset of a “connie” and a “gym-rat” are startlingly similar in one way: We’re both obsessively passionate.

Musicians and athletes both practice for hours on end with no tangible results at the end of their labors. There are expectations in both fields to improve yourself, but when it comes right down to it, nobody is paying you to practice. For hours on end, athletes and musicians labor over infinitesimal details that anyone not practiced in our field would hardly recognize. Yet we constantly strive to reach the unattainable goal of perfection.

Despite the inconvenience of getting there, when given the choice, most athletes choose to go to Alex instead of working out at the Wellness Center or the YMCA. While it’s undeniable that the Wellness Center and the YMCA are both easier to get to and  are equipped with more modern and versatile workout facilities, there’s something about the familiar thick brick walls and home court experience that draws athletes to make the mile trek over to Alex.

Besides all the complimentary perks enjoyed by athletes, such as having their laundry done overnight for free and having athletic trainers available to them rehabilitate their injuries, for many, Alex is where mentors can be found in the form of coaches. The relationship between an athlete and their coach is often a balance between mother and drill sergeant.

Whichever end of the spectrum your coach ends up on, your team serves as a welcome distraction from the constant reminder of stress and workload that comes with  college.