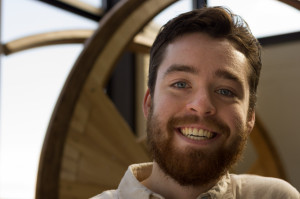 Although Lawrence’s mascot is the Viking, the campus is tragically deficient in Viking décor and paraphernalia. That’s why senior Olav Bjørnerud decided to construct a Viking ship-inspired sculpture and have it installed in the Buchanan Kiewit Wellness Center this year.

“It’s always been strange to me that there wasn’t a Viking ship on campus,” Bjørnerud said. “Vikings are all about Viking ships, it’s one of their biggest symbols. So that was my main motivation. It’s a disgrace that we didn’t have one already!”

Bjørnerud, a studio art and history double major, combined his interests for this project. While studio art is something he hopes to pursue professionally, history is something that he holds very dearly. He described this sculpture as a “reference to the past,” thereby “rooting it to something larger than just a kid making a big fake boat.”

One of his studio art professors informed Bjørnerud about two years ago that Lawrence was looking for a piece to be featured in the Wellness Center.

Boats were on Bjørnerud’s mind at the time. For instance, a friend of his was on a trip around the world building canoes. What’s more, Bjørnerud himself had just gotten back from the UK, that great maritime commonwealth. During his time abroad, he also travelled to Norway and Sweden, where he saw many active boats and many Viking ships in museums. He notes these as his key inspirations.

He submitted the idea for the ship and it was accepted. After working on the project over the past two summers, he at last finished before this school year.

“Viking ships are an object of beauty, but they’re also very functional,” Bjørnerud explained. “It’s not necessarily a trade-off between form and function. The best solutions seem to be what is both simple and elegant at the same time.”

The Viking ship sculpture is indeed simple and elegant: A smooth wooden piece that can be viewed on the main stairway between the second and third floor of the Wellness Center.

“It’s a great spot,” Bjørnerud said. “You can see it from almost all angles.”

Bjørnerud focuses almost entirely on sculpture, which allows him to work with a variety of materials. He prefers wood, as it is something he finds enjoyable and finds himself particularly good at. The ship is his most recent project since he does not have any art classes this term, but he expressed enthusiasm toward his currently ambiguous project in the works for the senior show in the spring.

Before coming to Lawrence, Bjørnerud had not taken an art class since middle school. He regained a penchant for the craft since taking Intro to Studio Art.

“I kind of forgot that you can take classes where you get to play with papier mache,” he explained. It “opened my eyes to a world I’d kind of forgotten about.”

After Lawrence, Bjørnerud plans to take a year to “experience real life for a little while.” He would like to go to design school eventually, but that’s as detailed as he can get in terms of his career path.

For extracurricular activities, Bjørnerud participates in the newly formed cross-country ski team, can frequently be seen baking bread in Greenfire—“It’s very tactile,” he said. “Baking bread has a lot in common with sculpting!”—and co-hosts a radio show specializing in folk music.

Bjørnerud expressed much contentment with his time spent at Lawrence, saying that he felt in fact that it went surprisingly fast. With this installment in the Wellness Center, we will have a beautiful piece of artwork to show his impact on campus for years to come.

Although Lawrence’s mascot is the Viking, the campus is tragically deficient in Viking décor and paraphernalia. That’s why senior Olav Bjørnerud decided to construct a Viking ship-inspired sculpture and have it installed in the Buchanan Kiewit Wellness Center this year. “It’s always been strange to me that there wasn’t a Viking ship on campus,” Bjørnerud…