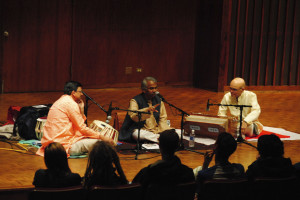 The Hindustani classical musician is composer, conductor and musician all in one, explained vocalist Dr. Pandit Nagaraja Rao Havaldar to an intimate audience during the concert he gave in Harper Hall on the evening of Thursday, Oct. 24.

Rather than consisting of musicians directed by a conductor playing music written by a composer, as in the Western classical music tradition, Hindustani classical musicians improvise two-to-three-line melodies that they know by heart upon raagas. There is no harmony in classical Hindustani music, only melody and rhythm. Different raagas correspond with various times of the day; traditionally, musicians only play morning raagas in the morning, night raagas at night, and so on.

The music comes from “here,” Dr. Havaldar said, pointing to his head, and “here,” pointing to his throat. “The inner creative details are different each time you sing.” Hindustani classical musicians follow no written music, relying only upon their memory, experience, interaction with others and impulses of the moment.

Despite the differences between Hindustani and Western classical music, Dr. Havaldar said that music “crosses all barriers.”  As one of the preeminent musicians of the genre, he has toured widely in the U.S. and elsewhere promoting Hindustani classical music.

In his role as lead vocalist, Dr. Havaldar’s voice must traverse many octaves. He also demonstrated and explained various types of scales, vocal techniques and rhythms used in Hindustani classical music.

Although the improvisatory nature of the music may lead some to believe that it arises out of pure emotion, Dr. Halvador often repeated that it’s a “scientific art and an artistic science,” shaped by both order and creativity.

Classical Hindustani music is also clearly a collaborative endeavor. As participants in an oral tradition, master musicians must pass down their knowledge, wisdom and expertise to students to ensure the music will continue to exist.  Dr. Havaldar studied for twenty-six years with his teacher, whom he often spoke of with great respect.

The difference between Eastern and Western mentalities in this regard struck me—it seems to me that many Westerners, and especially Western classical musicians, are more likely seek “perfection” as quickly as possible, endeavoring to set themselves apart as individuals, instead of approaching learning as a long, collaborative process that lasts a lifetime.

I also noted the collaborative nature of classical Hindustani music during interactions between the members of the ensemble. While playing, they communicated with subtle hand gestures, eye contact and facial expressions, revealing time-worn relationships. The close awareness of and response to fellow musicians reminded me of improvisatory jazz music.

As Dr. Havaldar reminds us, musicians the world over are not so very different from one another. We share much in common, and where we differ, we can learn from one another. Although most of the audience members had never received training in Hindustani classical music, they still greatly enjoyed the performance. The turnout was poorer than he deserved due to reading period, but for those who attended, Dr. Havaldar provided a fascinating and beautiful evening of music.