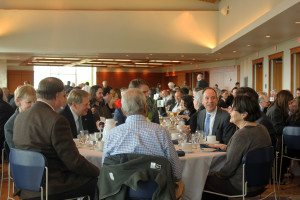 Lawrence was witness to a historic event this past Saturday, Oct. 26 as Mark Burstein was inaugurated as the university’s sixteenth president. The audience at Memorial Chapel included current students, alumni, staff and community members, all of whom were ready to give a formal welcome to Burstein, who took office at the beginning of July.

Burstein was inaugurated formally by the chair of the Lawrence University Board of Trustees Terry Franke ’68 and Associate Professor of Spanish Rosa Tapia. This was followed by the president’s inaugural remarks.

“I start today humbled and energized by the trust you, the Lawrence community, have placed in me,” Burstein began. “I will do all that is within my ability to fulfill this trust.”

In his speech, the president connected Lawrence’s challenging but inspiring founding days to the present. He said, “The dynamics of our founding, including resource constraint, human ingenuity and the importance of excellent leadership, continue to be themes that shape the institution today[…] Like our founders, we also live in an uncertain world, on the boundary between what is known and what is new, where different ideas and concepts intersect, and new possibilities exist.  For us, as it was for them, such a situation is critical for individual growth and for a thriving learning environment.”

Additionally, Shirley Tilghman, President Emerita and Professor of Molecular Biology at Princeton University, and Catharine Bond Hill, President and Professor of Economics at Vassar College, filed into the chapel with Lawrence’s new president. The two of them were invited to speak at the inauguration ceremony because of their friendships and professional relationships with Burstein.

Among the audience at Memorial Chapel were Margot Warch, widow of Lawrence’s fourteenth president Rik Warch, and President Jill Beck and her husband, Rob Beck. The ceremony was also broadcast via the internet, allowing the overflow crowd in the Warch Campus Center and other Lawrence community members from all over the world to watch the inauguration live.

Franke opened up the ceremony by “updating [his] observations on Mark based on his 115 days since he assumed office on July 1.” Franke spoke to Burstein’s unique set of work experiences, which includes time as an executive vice president at Princeton University, vice president of several departments at Columbia University and experience in economic development and public finance. He also cited the president’s strengths and noted that these qualities line up with many of the adjectives used to describe Burstein during the interview process, such as “engaging, smart, sensitive, open, transparent and self-confident, but not arrogant.” Lastly, Franke emphasized the president’s commitment to the liberal arts, a key characteristic they looked for during the presidential search.

Franke was followed by a reading from Plato’s “The Republic” by Benedict and Reeve, which was initially met by knowing laughs from the audience. After this, Paulson briefly spoke as a representative of the student body at Lawrence, saying he was looking forward to seeing Burstein “beaming his way across campus.”

Mayor Hanna was next to take the stage, and he brought forth more laughs from the audience as he discussed the marriage of Amos Lawrence, the founding funder of the university, to Sarah Appleton, the original namesake of the city. He used this relationship as a metaphor for the ties between the university and the city, saying that the only reason Appleton exists “is because Lawrence exists.”

But what was arguably the most memorable part of Mayor Hanna’s contribution to the inauguration was his inclusion of a video message from Mark Murphy, President and Chief Executive Officer of the Green Bay Packers. Murphy welcomed Burstein to Wisconsin and cued Mayor Hanna to present him with an official Packers jersey.

Tilghman and Hill were next to speak, and both were in agreement that Lawrence was fortunate to be gaining Burstein’s leadership, while also taking the time to poke fun at the president. Tilghman teased his lack of knowledge of Wisconsin athletics and his intolerance for cold weather, while Hill jokingly teased Lawrence on its acquisition of a Vassar graduate rather than congratulating Burstein on his new position. Both speeches ended warmly, with Tilghman sayin, “Lawrence stands for excellence and integrity in all that it aspires to do. And Mark Burstein will give new substance and expression to its work. If ever a marriage were made in heaven, I think that this is it.”

“Such powers of organization, of having a goal, of taking the time to understand a problem and entertain different points of view are rare enough,” she said, “but Mark’s powers of being a careful listener and transforming what he hears into a plan of action are even rarer.”

Burstein’s inaugural remarks did, in fact, imply a plan of action. Along with the aforementioned connection of Lawrence today to Lawrence at its founding, he challenged and encouraged the audience with the question, “Can we find a way as a community to rejoin [Lawrence’s first president William] Sampson and his band, struggling to lift up an institution in an environment full of the unknown? As Lawrentians, I believe this is our birthright and our distinguishing characteristic. We know how to fully embrace the frontier, the unknown, the radical, the unexpected —because we have done it before.”