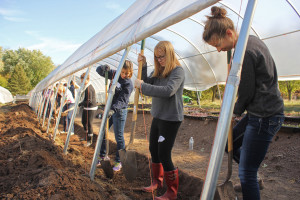 The inauguration weekend for Lawrence kicked off with performances by various Conservatory groups. Conservatory sophomore Alek Wasserman said, “I think it’s awesome that we were able to have these Conservatory groups perform for Burstein’s inauguration. At another liberal arts school, you may be able to do many things for an inauguration, but rarely does a school have so much musical talent at its disposal to celebrate such a large event. It’s part of what gives Lawrence it’s character.”

The following concerts were held: Classical and jazz groups played at Harper Hall; brass groups played at Main Hall;  woodwinds played in the Steitz Hall Atrium; acoustic/bluegrass performances were held in the Mudd Library; and funk groups performed in the Viking Room.

Lawrence Jams, held in Esch Hurvis from 8 p.m. to 12 p.m., was a student-run party to celebrate Burstein’s inauguration. Those who attended entered an Esch-Hurvis filled with blue and white streamers, balloons and other decorations and were able to enjoy food, beverages and dancing to the music of the bands Snort, Porky’s Goove Machine and Holy Sheboygan.

In between acts, LU Improv performed skits to encourage audience participation in the performances. Additionally, a raffle was held for students to enter, which included prizes such as a dinner with the president or a free parking space for a year offered by Vice President for Student Affairs and Dean of Students Nancy Truesdell herself. According to LUCC member sophomore Wes Varughese, “Lawrence Jams was a way to bring together everything that happened this weekend. It was a way for Lawrence students to come together, relax and celebrate President Burstein’s inauguration.”

On Sunday morning, several dozen students headed to Riverview Gardens to volunteer with the president. Riverview Gardens is an urban farm that grows and sells produce as a way to provide employment opportunities to Appleton residents struggling with employment. Staff member Liam O’Brien, a Lawrence alum, said, “We are seeing an increase in poverty and homelessness in Appleton. There are non-profits popping up, but the funding for them is flat. It isn’t increasing.” Riverview Gardens tackles this problem by growing and selling produce. Rather than asking for donations or holding fundraisers, the money that Riverview dedicates to philanthropic purposes comes from their profits.

President Burstein believes that Lawrence and Riverview gardens can build a mutually beneficial relationship. Although Lawrence sends volunteers each week to Riverview Gardens, Burstein hopes to expand on Lawrence’s academic resources to help tackle the issue of unemployment and homelessness in the Fox Cities.

Additionally, Burstein also discussed the ways in which Riverview Gardens itself benefits Lawrence students. “Like other strong partnerships with other non-profit organizations, Riverview Gardens allows students to get off campus and see some of the issues that face the area and, quite honestly, the nation.”

When asked how to encourage Lawrence students to engage in volunteer work, he said, “One of the great things about Lawrence is that students are already excited about getting involved in the community. More than half the students here are doing meaningful service work. What’s important is to make sure that all those experiences are meaningful both personally and as a learning experience. Also, these experiences can be meaningful from a career development perspective, having a service experience that makes you think about what you want to do after you leave Lawrence.”