The shrine of empty cans and bottles of alcoholic drinks on the third floor of the Warch Campus Center, with the words, “Are you majoring in alcohol?” dangling on a poster above it, provides a visual representation of a big part of Lawrence social life. The display reminded me of a conversation I had with the  Lawrence Christian Fellowship’s adviser and my foster dad, Tim Webster ‘86, about how easygoing the social life is at Lawrence.

According to webster, when he was at college, the parties used to be even more wild than they are now, and some of his peers went to college just for the partying experience, especially in bigger schools like UW-Madison and the University of Michigan.

As much as I love a good party, I was very happy to hear that, because on my revised college list, UW-Madison, which was the number-one college in Wisconsin for the most raging party scenes on College Prowler at the time of my research, had fallen off and somehow Lawrence University found its way to the top.

Coming from a country where there is no binding law against underage drinking or clubbing, I did not understand what the fuss was about turning 21 or even the thrill in obtaining alcohol or managing to enter a club. It wasn’t until a friend at UW-Madison, with whom I was going to spend fall break, told me that he could only take me out to the clubs if I had a fake ID that I realized that American partying was very different from home. He told me that we could instead hang out at frat parties, though they get a bit crazy.  Now, even though I do not drink, I was a little disappointed to find that my little exploration of the night life available was limited by my age, even though I had become a bona fide college student.

Needless to say, I was not too keen on going. After all, at Lawrence we do not need to go outside the campus to have an awesome time, which is unique to our school. For many other schools, ‘the bars’ or expensive clubs are at the center of student fun; but many of the largest parties at Lawrence actually occur on campus. Perhaps it is the winter cold or our general interdependence that brings us in such close proximity. Nonetheless, instead of bumping elbows with co-eds from other universities, it seems Lawrence students like to keep to ourselves.

Freshman Allison Brooks-Conrad, who has experienced the party scene at University of Michigan, liked the fact that at Lawrence, the partying scene is way more controlled and you do not have to wake up to the front yards of frat houses “littered with red paper cups,” like in the movies. 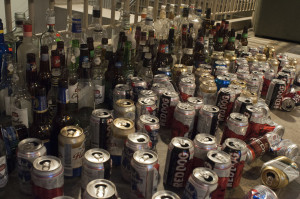 Even though there can be as many as four parties going on in one night, the difficulty is not so much which party to go to, but rather whether to leave the bed and laptop sad and lonely for the night to bother dressing up for a party.

Living in Sage, notorious for being a ‘social’ dorm, I’ve been asked a couple of times how I handled the party situation. To be honest, it has never been a problem for me.  There are a couple of mornings when I walk out to take a shower and see the garbage cans overflowing with empty beer cans and wonder whether just one person drank those alone in a quiet room, or perhaps there are sound-proofed rooms on my floor reserved for raucus room parties that I just don’t know about.

It just shows you how controlled the atmosphere is, that even when you hear Avicii’s “Wake me Up” blasting from the room two doors down, you just do a little groove with the song and then go back to watching the new episode of “Scandal.”

Certainly Lawrence gives you the best of both worlds, especially if you are someone who does not mind changing it up or turning up once in a while. A great party never hurt anyone and a good break after a long week is definitely a must, however you define the word “break.”