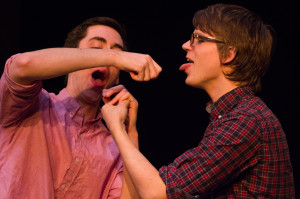 On Friday, Jan. 21, Lawrence University’s improv group, known as Optimistic Feral Children, put on their first performance of the term in Cloak Theater. As usual, the theater was filled with laughter as the group played a variety of games themed around summer camp.

Optimistic Feral Children, formerly known as Hi, I’mProv, was formed in September 2011. Over the past few years, the group has continued to progress and they recently received their own group housing in Comedy House.

The night opened up with a game called “Sex with Me,” where the members related camp activities, such as making friendship bracelets, with sex. Beginning with a group activity paid off as the entire room immediately felt the chemistry the group shares.

Throughout the rest of the night, the members participated in a variety of large and small group games, including “Massive Meanwhile,” “Rotations,” “Too Many Feels,” “Survivor” and many more. Each of these games included a different set of members from the group.

My personal favorite was the game “Rotations.” In this particular game, four members stand in a square formation, creating four sets of pairs next to each other. Each of these pairs forms their own scene off of one- or two-word audience suggestions. The impromptu scenes were not only creative, but also hilarious.

One of the best aspects of improv shows is the interaction between the performers and the audience. Optimistic Feral Children excels at this. The audience participates in the scenes by offering suggestions for locations and topics.

The group also is not afraid to laugh at themselves and at each other throughout the show, which makes the audience feel more included in the action. Particularly in the “Survivor” game, the actors are forced to mimic each other’s lines and acting as they repeat the scene three times over.

As all of Optimistic Feral Children’s shows end, the night concluded with an all-group round of “Harold.” Clearly a favorite game among the group, the members incorporate personal experiences about a given topic into their scenes.

On this given night, “Harold” had a loose focus on the audience idea of “boats.” This theme led to a series of acts including vomit, childhood trauma and long lost love. The game incorporates the whole group as they feed off of each other’s ideas in the moment.

Overall, the improv shows are a night full of fun and laughter by both the audience and the participants alike. Anyone with a healthy sense of humor would enjoy listening to this innovative group of 12 create a humorous show on the spot.

If you are interested in experiencing the improv firsthand, the group holds open improv every Friday at 5 p.m. in the Sage basement. Anyone is welcome to attend these open practices, whether to participate or to simply observe.

Like the Facebook page at www.facebook.com/lawrenceimprov to learn more about the group and to get more involved.