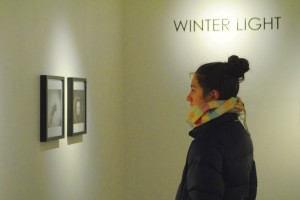 On Thursday, Feb. 6, the winter cold permeated the third floor of the Seeley G. Mudd library as the students of the Introduction to Photography class opened their new exhibition, “Winter Light,” in the Mudd Gallery. Inspired by Ingmar Bergman’s film of the same name, the students used low-tech HOLGA cameras to explore the stark, cold winter landscape and the human activities that transpire there and, according to their artists’ statement, “sought to use the atmosphere and landscape of winter as inspiration.” The black and white photos that resulted convey a sense of the coldness and solitude that winter can seem to bring while also reminding of the humanity that exists alongside the snow.

Students in the class include seniors Mary Diduch, Erik Morrison, Thao Nguyen, David Nnah, Amanda Ollerer and June Shim, junior Annica Mandeltort and sophomore Tess Gundersen. For many, this class was their first photography experience. Senior Morrison, in his first photography class, remarked, “Some of us have done some fine art photography, but almost none of us have film or darkroom experience. It’s been fantastic to have a truly fantastic darkroom available [in which] to learn.”

The show was definitely a collaborative learning experience, taking students through the entire process: Learning to use their cameras and the darkroom, creating promotional materials and setting up the show itself. Of the new medium, Morrison noted that “working with the HOLGA cameras was sometimes a little tough—they’re very simple but also very rudimentary, and a lot of us shot a couple of complete rolls of film before we had anything worth using.”

Putting together the exhibition itself involved a lot of combined effort. Says Morrison of the exhibition’s opening day: “We all split up the duties of putting the show together, so we had a nice buzz going between the library and Wriston the day we installed the photographs—folks working on promotional materials, installation and auxiliary stuff like labels and our artists’ statement.” In addition to learning a new art form, the students came together to create not only a cohesive set of photographs but a successful exhibition space.

Looking at the final product, it’s hard to tell that these students were originally struggling to produce with their HOLGAs—the final photographs are artistically arresting and streamlined, truly managing to convey the “serenity, nostalgia and the sublime in the interaction of human activity and the winter environment” that Morrison describes in the artists’ statement that he wrote for the group.

The photos that students selected for the show are varied, but all demonstrate the same winter reflection. The opening itself attracted quite a few attendees, whether they were students hopping library floors to take a study break or others seeking some brief refuge from the cold outside. Everybody enjoyed the opportunity to partake in refreshments provided by the students themselves while considering these photographic reminders of the humanity despite the snow. If the ice and cold are getting you down, take the opportunity to stop by the Mudd Gallery on the third floor of the library. The exhibition will available for viewing until Feb. 17.