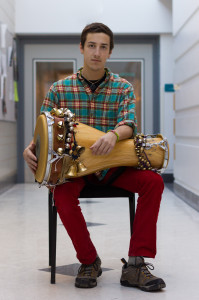 Eli Edelman, senior percussion performance major, is gearing up for his senior recital on Saturday, March 1 at 1 p.m. He will be playing pieces from a variety of genres on a variety of different percussion instruments.

Over the course of his music career, Edelman has dabbled in plenty of instruments, including trumpet and piano. However, the rhythm and particular beauty only attainable through percussion has always been his calling from an early age. Says Edelman, “Since I was five, I was asking my parents for drums.” His parents responded by buying him a set of bongos. At seven, he got a drum set. He has always loved the rhythm of percussion and has been drawn towards it throughout his whole life.

One of the reasons Edelman chose to attend Lawrence University four years ago was because of the many world music groups across campus. While he has always been interested in world music, he is particularly interested in Afro-Cuban music.

Edelman first fell in love with the Afro-Cuban style of music during his first trip to Cuba. During his time at Lawrence, Edelman has traveled to Cuba twice, gaining more knowledge of the music with each trip.

The Afro-Cuban style of music travelled to Cuba along with slaves from Africa. As a result, the music is traditionally taught orally, has not been written down and can only be learned by ear.

Luckily for Edelman, his trips to Cuba have provided him with a large repertoire of Afro-Cuban music. The only way for him to learn more of the music is to find others’ recordings of the music and teach it to himself.

When asked his favorite element of Afro-Cuban music, Edelman responded with a simple, “Everything.”

Edelman’s recital consists of a variety of pieces performed on the marimba as well as multiple sets of drums. The first half of the performance will include Vals Venezolanos, Almendra and Rondino.

The second half of the recital is when the Afro-Cuban side of Edelman’s musical taste will come out. He has arranged his own compilation of the music for his performance. His arrangement is half an hour long and relates a folklore story to the audience.

This special music is traditionally only played in ceremonies and other private settings. His friends and one of his instructors are going to assist in the performance in order to make the rendition as true to its normal setting as possible.

Although Edelman is a talented musical artist, his talents extend outside of the realm of performance. In addition to percussion, he is majoring in history with a double minor in Latin American studies and Spanish. He is a five-year student, and will be on campus again next year, although he’ll be focusing more on the history major.

Stop by Harper Hall on March 1 if you’d like to discover a new genre of music! The recital will host a variety of different styles of music, and will be enjoyable for all with a taste for rhythm.