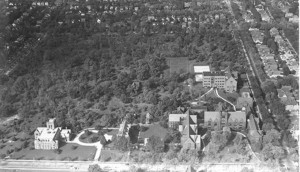 Fifty years ago, a new union formed between Lawrence College and Milwaukee-Downer College, a partnership that helped preserve many of Milwaukee-Downer’s traditions and shaped Lawrence into the eminent liberal arts university that it is today. The event will be commemorated by a ‘golden jubilee’ celebration at this year’s reunion weekend. Despite the interesting history of both Milwaukee-Downer and its consolidation with Lawrence, much of the story of this union is largely unknown among students today.

Milwaukee-Downer College originated in the Milwaukee area as one of the Midwest’s premier all-women’s colleges for over a century, but enrollment began declining during the post-WWII period until it was less than 160 students in the early 1960s. The events of the ensuing union were well documented in Charles Breunig’s “A Great and Good Work,” published in 1995, which chronicles Lawrence University’s history. Facing difficulties in funding the college’s faculty and facilities, Milwaukee-Downer’s board of trustees met in secret to determine a course of action. The leading proposal was to consolidate the college with either a similar women’s college or liberal arts institution.

They finally decided to join up with Lawrence College to form Lawrence University. The old Milwaukee-Downer campus was sold to the state for the newly expanded University of Wisconsin-Milwaukee, with the proceeds entering the Lawrence endowment. Both faculty and students were offered to fully transfer their status to Lawrence.

Though the trustees’ plan saved the college from financial distress, its secret formation angered many of the students and faculty, who felt they had no say in the college’s decision. Nevertheless, in 1964 Milwaukee-Downer College shut its doors, and Lawrence College reopened as Lawrence University.

Many artifacts and emblems of Lawrence today were also transferred from Milwaukee-Downer: the sundial on Main Hall’s southern wall and the teak room found within Hurvis Center. Several buildings today also reflect Milwaukee-Downer’s past, including Briggs Hall, named for former Milwaukee-Downer president Lucia Briggs, and Sabin house, named for president Ellen Sabin. Lawrence’s recognition of prominent Milwaukee-Downer faculty and alumni is an important part of our university’s effort to continue to honor the original partnership formed 50 years ago.