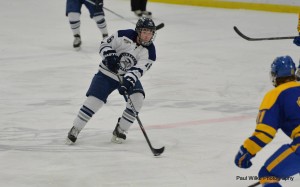 The Lawrence University hockey team (6-17-2, 5-12-1 NCHA) split last weekend’s series with Finlandia University (3-20-1, 2-16 NCHA) to capture a spot in the NCHA Harris Cup Playoffs. After the Lions edged them out 4-3 in overtime on Friday, Feb. 14, the Vikings rallied to come back hard on Saturday, Feb. 15, capturing a 4-2 victory fronted by freshman Blake Roubos’ electrifying hat trick.

The first goal of the weekend was scored two minutes into Friday’s game, before Finlandia put two more on the board in the second period. The Vikings were looking to turn the game in their favor just as sophomore Steve Hughes delivered at 17:21 in the second. Assisted by seniors Huck Saunders and William Thoren, Hughes’ first goal of the season made the score 3-1 going into the third period.

Lawrence used the positive momentum from the previous period to put two goals in the net in under a minute, tying the score at 3-3. Sophomore Renato Engler lit the lamp near the end of a power play at 7:19 off assists from freshman Blake Roubos and Saunders. Then Engler and Hughes assisted junior Logan Lemirande in beautifully maneuvering the Vikings’ third goal into the net at 8:05.

The Vikings fought Finlandia’s offensive pressure and delivered some of their own the rest of the period. They came into overtime shooting aggressively as well, but the Lions slipped one by freshman goaltender Mattias Soderqvist three minutes into the frame, securing a narrow 4-3 victory. Soderqvist stopped 24 shots to Finlandia’s 49 saves, and the Vikings outshot the Lions 52-28.

On Saturday, Feb. 15, the Vikings found the success they sought, propelled by Roubos’ impressive hat trick, the first of his career and Lawrence University’s first since 2009.

Saunders opened the game with a goal 12:27 into the first period. Thoren and Roubos were credited with assists. The Vikings stepped up the pressure in the second period and played very aggressive offense. Roubos scored a power play goal off assists from Thoren and Hughes less than five minutes into the period, doubling Lawrence’s lead to 2-0.

Engler and freshman Ryan Robertson assisted Roubos in a beautiful goal at the beginning of the third period, sent right into the top corner of the net. The Lions quickly retaliated with a shot that slipped between Soderqvist’s pads and the pipes, cutting the score to 3-1. After a charging penalty put the Vikings down a man, Finlandia capitalized with a power play goal to make it a one-goal game.

A series of gorgeous passes set up Roubos to complete his hat trick at 10:51. Engler and Thoren collaborated to pick up their second and third assists of the night, respectively. Although the shot margin was smaller—31-28 in Lawrence’s favor—the Viking attempts found their target more effectively, and the defense worked successfully to aid Soderqvist, who made 26 saves to pick up the victory. Finlandia made 27 saves with two different goalies in the net.

The Vikings will face No. 1 St. Norbert College in the NCHA quarterfinals.