Lawrence adds own voice to world-renowned “The Vagina Monologues” 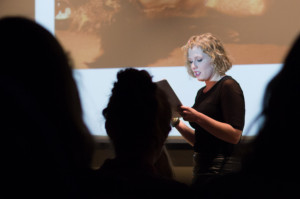 The Warch Campus Center’s cinema was overflowing on Tuesday, Feb. 18 for “The Vagina Monologues,” sponsored by the Downer Feminist Council (DFC). The show is produced through the activist organization V-Day, which has launched a global movement to end violence against women and girls.

“The Vagina Monologues” originally began in 1998 with Eve Ensler, who interviewed over 200 women about their experiences and thoughts concerning vaginas and then synthesized the women’s stories into monologues. These anecdotes have since been presented internationally and exclusively by women.

One monologue, titled “Reclaiming Cunt,” stood out to senior Mary Curtin. She said, “I think it’s important to reclaim our own terminology. As women [they are] our bodies, [they are] our body parts, and we shouldn’t have those words flung around at us instead of using them the way we feel they should be used.” Curtin further articulated that the monologues “bring up issues in a way that’s empowering and amusing so that we can feel more comfortable taking control of the way that we talk about our bodies.”

Sophomore Hannah Klawes talked about the response from the crowd. She said, “The coolest part was how reverent and quiet everyone got after the really sad stories, how into it everyone was. You could just feel the entire room focusing on them.”

Klawes added, “It was refreshing because I thought everyone would be embarrassed but I didn’t feel that.”

Junior Joey Belonger spoke more generally of the production as a whole and why the “Monologues” are important to have at Lawrence.

“I think that having the ‘Vagina Monologues’ on campus is really great because there’s a lot of body negativity, especially around women’s bodies. I think society really puts restrictions on what women’s bodies are supposed to be like or do and I think this is a way to kind of empower and spread the word of the vaginas.”

The director and a presenter of “The Vagina Monologues” for the third year in a row, senior Sophie Durbin, elaborated on society’s perception of women’s bodies.

“The world doesn’t really think about women’s bodies in ways that aren’t objectifying,” said Durbin. “I think for a lot of people it’s an experience that opens their minds to some of the realities of what it’s like to have a body that is under that much scrutiny.”

This year senior Sarah Jane Rennick also helped Durbin in spearheading the event by doing various administrative tasks. Rennick commented, “It’s just an amazing, empowering experience to see and help all of my friends and colleagues and peers to put on this show that I think is really informative. Anything I could do to help was really fulfilling.”

Rennick also coordinated with Harbor House Domestic Abuse Programs, where proceeds from the “Monologues” primarily went. Each production of the “Monologues” is encouraged to donate to local organizations that provide services to women and girls subjected to violence.

President of DFC, sophomore Tracy Johnson, took part in preparing for and delivering the monologues, but also pointed out a problematic aspect of the production’s focus. “It equates womanhood with having a vagina, kind of reduces it to that. Where there are people that identify as women that don’t have vaginas or people who have vaginas and don’t identify as women. So I think it’s very second-wave in that sense.”

However, Johnson additionally stated that the “Monologues” have “definitely helped a lot of women to feel more comfortable in their bodies” and that she believes it is “a watershed production” in its ability to start a conversation on campus.

Beyond “The Vagina Monologues,” another of the various campaigns organized by V-Day is “One Billion Rising,” an event that Amnesty International will be sponsoring on campus in the upcoming weeks.