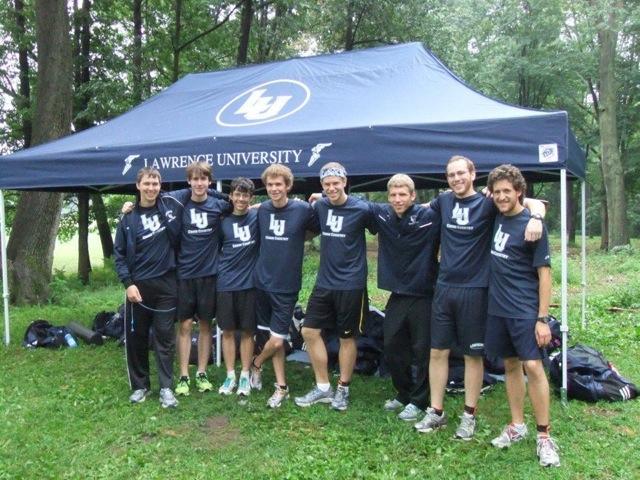 There’s a saying among cross-country runners that “Our sport is your sport’s punishment,” referring to how other sports use running as a disciplinary tool when a team hasn’t met their coach’s expectations. Fumbling the football, committing an error in baseball, shoddy defense on the court — all of these warrant a few humiliating laps, but what has the cross country runner done to deserve the Sisyphean toil of his or her laps? In other words, why — and how, for that matter — does the runner run?

For some, the motivation for running lies in the team aspect of cross-country. Even though running a race is an individual battle, so much of a runner’s motivation and excitement stems from the team’s goals.

This is most certainly the case with the Lawrence cross-country team. Coach Jason Fast puts lots of emphasis on going into each race with a solid strategy, and noted that if a runner can see all the pieces of the strategy coming together during a race, it provides a confidence boost: “Distance running is a very mentally challenging sport so we try to make our strategy as simple as possible and we make everyone on the team a part of that strategy.”

So much of the focus in workouts and races is put on running with teammates and using the positive reinforcement of the teammates to better the individual. “Each mile [during the race] that you successfully execute that strategy only builds your motivation, and although you are in pain it makes it just bearable enough to continue pushing because you know your teammates are doing their part as well,” stated Fast.

Not only is that teamwork built through racing alongside teammates, but also through a positive supporting team environment off the course. The Vikings find pride in their community on the team; one will rarely find a Lawrence cross-country runner dining in Andrew Commons without a host of fellow runners alongside.

It’s hard to imagine how this fraternity translates to running faster over the course of the grueling 8,000 m for men or 6,000 m for women, but it really does. “Because we’re so tight-knit off the course,” commented sophomore Dan Thoresen, “we’re more trusting and motivating to each other [on the course].”

But that doesn’t really answer the question. What drives the runner to keep running? What does a runner gain from the ceaseless miles through the rain, sleet, and snow?

Sophomore Anna Ratliff answered, “I like the sense of accomplishment. I’m motivated to keep getting better.” So in some ways, cross-country is a sport of continual improvement.

“The more time and hard work you put in,” asserted Ratliff, “the better you get.” Thus, cross-country is a hybrid between team and an individual sport — motivation to succeed comes from both the individual and the team. Running is not a punishment as the saying claims; rather it is a test of limits — both physical and mental — that motivates the runner to strive for their personal best with the unwavering support of the team.

The Lawrence Viking Cross Country team has their home meet this Saturday, Oct. 8 at the Reid Golf Course across the Fox River at 10 a.m. The team would love support as they run against some of their toughest competition in the conference.