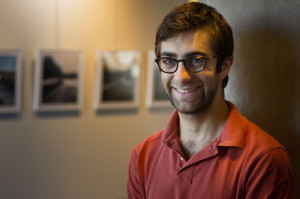 The sidewalks of College Avenue, a mountain pass, a trail through a park between dense forestry. People established these paths to get from place to place. One may see them as merely means to an end, but greater depth exists behind paths. Senior photography student Will Melnick is fascinated by the beauty and profundity of paths, of the journeys and human traces they represent. In an effort illustrate the aesthetic and symbolic potential of paths, he created a series of pathway photographs. These photographs are now on display in his gallery “Landmarks” on the third floor of Warch Campus Center.

Melnick is an economics major and studio art minor. He appreciates economics for the directness and clarity of its logical theory. He is also interested by how the social science makes value judgments on things like time and effort.

His interest in studio art of course stems from his passion for photography, which he has held onto for as long as he can remember. He received his first camera when he was four years old and has collected them ever since. The mechanics of the camera fascinated him. Additionally, photography was a convenient medium for him to express his artistic ideas without having to draw, paint, or otherwise shape them with his hands.

Melnick hails from western Massachusetts. His homeland served as the main inspiration for his photography series.

“I lived in New England for 18 years, and got familiar with the land in that time,” explained Melnick. “So I knew these places, but I never really appreciated them, their beauty. But after going to Wisconsin, where everything is flat, and after taking classes and learning more about art here, I gained a better eye for really appreciating these landscapes.”

Melnick is generally drawn to landscapes. He finds that path landscapes in particular have an interesting structure. As he uses primarily film photography, he puts a lot of emphasis on the structure of the shot. He is captivated by the way images of paths are set up, with the beginning and end left ambiguous.

“Visually, paths appeal to me,” continued Melnick. “I like the idea of being on a path. For me, it’s—this might sound cliché—but it reminds me of the paths we’re on in life.”

One of the main facets in this series is how paths inherently leave human traces. If someone walks through a forest every day, obviously their path will eventually be patted down to the point where it will be left behind long after that person is gone. Paths also symbolize human connection. They connect Point A to Point B, so the people of each respective point are able to meet. In addition, paths are a universal benchmark in landscapes. Everyone needs to move, so images of paths end up being strikingly familiar.

“Something I found interesting,” said Melnick, “is that a huge amount of people came up to me and said ‘Oh, I know where that picture was taken,’ or at least ‘I know a place just like this’ or ‘I feel like I’ve been here before.’”

Melnick has been photographer for and Photo Editor of the Lawrentian, president of the Photography Club, and a member of the rowing team.

As of this writing, Melnick is still figuring out his post-grad plans. It seems appropriate to contextualize this within the path metaphor. His path may soon turn beyond the border of the image, but his journey will continue ever forward.