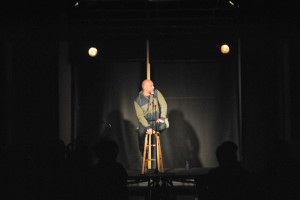 The lights were dimmed in the Esch-Hurvis room of the Warch Campus Center on Wednesday, April 16 as the audience awaited the spoken word performance of critically acclaimed poet, Buddy Wakefield.

Freshman Malcolm Lunn-Craft spearheaded the operation to bring Wakefield to campus with the help of SOUP and Professor Keith Pitts, Set Design and Staging Coordinator and Lecturer of Theatre Arts.

Lunn-Craft thanked the audience—a sizeable turnout—for being there and supporting the performance. Lunn-Craft then introduced the opening artist, freshman Cael Neary, who read one of his poems.

The piece revolved around conceptions of identity and how one friend told Neary he had a “Seattle Soul,” which became the title of the poem. The notion of transformation as a conscious act and wanting to meet certain criteria to fulfill an idea of a personality or a lifestyle fueled his performance.

The sentiments expressed in Neary’s poem, though personal, resonated widely with the audience. His eloquence, poise and feeling in his reading lent themselves to a smooth and beautiful performance.

After Neary’s recitation of his poem, Lunn-Craft then introduced Pitts, who had studied with Wakefield and had hoped for a performance of his at Lawrence University for a long time. He spoke of his gratitude for Lunn-Craft’s work in arranging for Wakefield to perform and of his deep respect for Wakefield. Pitts sang his praises and given Wakefield’s powerful performance, he deserved them.

Wakefield won the World Slam Poetry Championship in the Individual division two years in a row and the International Poetry Festival against the poets of seven European countries with his poems translated into Dutch. Additionally, he has published three books of poetry – “Some They Can’t Contain,” “Live for a Living” and “Gentleman Practice.”

He has also released three spoken word albums entitled “A Stretch of Presence,” “Run on Anything” and “Live at the Typer Cannon Grand,” the last of which he called his “favorite thing” at the merchandise table (such a glowing recommendation immediately prompted me to buy it).

Given his expanse of accolades and publications, one could have expected a rather formal performer, but Wakefield walked onto the small stage in a beanie, jeans and a hoodie. His casual, relaxed attitude and laidback speaking voice not only rendered the performance space more comfortable, but also served as a counterpoint to the most vehement moments in his poems when his voice grew the loudest and when he urged the audience to listen.

His performance style is unique—a word we Lawrentians see and hear constantly, but in Wakefield’s case, the positive adjective is fully warranted. He joked about not being able to see the audience, but then shared his views on religion, gay marriage, bigotry, freedom, self-expression, love, motherhood, death and related his experiences growing up in Texas to the idea of growing up in the Midwest.

The subjects of his poems have boggled the minds of philosophers both ancient and contemporary, but he discussed them with such ease and power of conviction that I was left with chills and, inevitably, teary eyes.

The intricacy of his metaphors combined with the relevance of the issues he discussed and his animated physicality made for a moving show.

He related to his audience and imparted his take on controversial issues, finding the commonalities between us, but also speaking to us with wisdom from a sensitive, conscious perspective that we should be reluctant to ignore.

He offered hugs to anyone and everyone who wanted them after the show. His humor, kindness, passion and humility were inspiring.