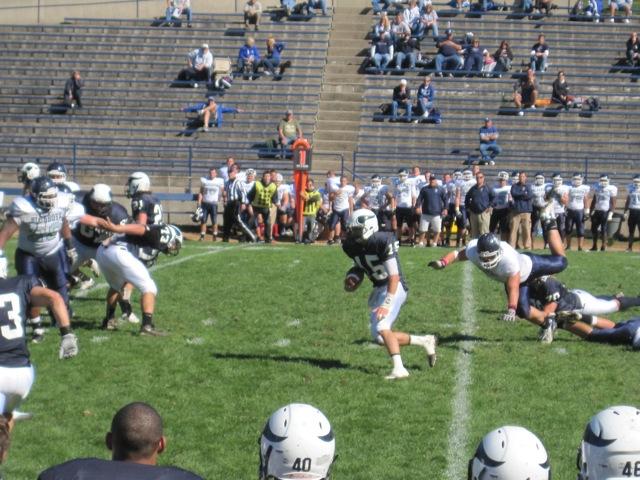 The Illinois College Blueboys managed to turn around Saturday’s game in the second half for a 54-44 win over the Lawrence Vikings. The Vikings currently hold a 1-3 record, tying with Beloit for seventh in the Midwest Conference.

Lawrence held control over the Blueboys for the first half of the game, both offensively and defensively. The Vikings received the kickoff and scored on their first drive in three plays, with a 67-yard catch by senior Jon Bruehl setting up sophomore Dominique Dirden to take it the final eight yards into the end zone.

After Lawrence fumbled the ball on the punt return, Illinois College recovered and scored on the drive, their first of eight scores for the game. The Vikings retaliated with a 21-yard touchdown reception by sophomore Taylor Mandich, ending the first quarter with the score Illinois College 6, Lawrence 20. The Blueboys scored twice in the second quarter while the Vikings’ Dirden had an 18-yard touchdown reception.

However, the game began to slip out of Viking control in the fourth quarter, as Illinois College scored three touchdowns in the first three possessions, making the score 54-37. The Vikings scored one more time at the end of the fourth, the final score 54-44.

Freshman Danny Taylor led the Vikings in tackles with nine, followed by Jonsson and junior Sam Ausloos with eight. For sacks, Jonsson and freshman Chris Moore each had one and juniors Nick Randall and Matt Larson each had a half.

Mazur lead the Vikings in receiving with eight catches for 126 yards, including one touchdown. Dirden had four catches, three of them for touchdowns. Barthelmess completed 29 of 53 passes for 443 yards, and passed for five of the Lawrence touchdowns.

On their loss to the Blueboys, Lawrence’s junior Alex Schmitt said, “Obviously a disappointing game for us. We had some great plays all around, but we also made too many mistakes to win. In order to win we have to play consistently well for all four quarters. The loss obviously hurts, but we can learn things from both wins and losses, so we need to get back after it and beat Carroll.”

The Vikings return to play at Carroll University this Saturday, Oct. 8.