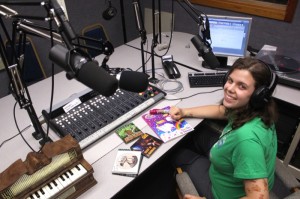 The Lisa Ball Park Frank Show is a radio show on WFLM most Tuesdays at 7 p.m. and is a unique opportunity to hear songs of our generations’ childhood and adolescence. This era is not old enough to be Oldies, but too old (read: good) to be on current radio stations and its representation on Lawrence airwaves is an important homage to Millenials. Senior Liz Vidulich, who co-hosts the show with senior Becky Dykes, shared her insight into the show’s progress and its back story.

“Becky and I realized we were pop culture twins and loved all the same weird stuff musically,” says Vidulich about the process of considering a radio show Fall Term. I had the idea and Becky was coincidentally looking to cohost a show with this awesome name she had come up with.” The title was ideal for the retro program, which piloted Winter Term. Since then the two have gone year by year through the music charts starting in 1998.

Every show starts with some pop culture facts and discussion of life during that year. Then they introduce the songs, which have been carefully chosen to represent their time.“ Becky and I have a good banter going. We usually sound out of breath on air, but it’s because we dance like crazy to the music we love,” said Vidulich. The casual yet informative atmosphere of the show encapsulates the excitement the hosts have for their favorite era.“ We really hope listeners will enjoy the nostalgia like us,” she said, “and just enjoy rocking out to the music you may be embarrassed to still have on your iTunes account.”

No matter how many listeners Lisa Ball Park Frank Show gets, one can be sure there are two women in the booth having a total blast. Vidulich reminisced, “One time we were playing ‘Whenever Wherever’ by Shakira, and watching the music video of it, and trying to emulate Shakira’s dance moves. I had lifted my shirt up to see if I could get my body to do what hers can (I absolutely cannot) and was looking at myself in the reflective glass of the studio window when one of the station managers walked into the room to see Becky and me trying to dance like Shakira.”A large part of the show is embracing one’s musical tastes and interests, and this story highlights the fun of having a radio show based upon common interests and good friendship.

Even if you are not an avid fan of early 2000s music, the show presents a brief escape to early life. Sometimes even Vidulich and Dykes show each other old music for the first time. Lisa Ball Park Frank Show was on hiatus this week to allow for Take Back the Night, but it will be starting up again with 2005 next Tuesday at 7 p.m., with special guest Peter Raffel.