The Salem Bitch Trials reflects on radio at Lawrence 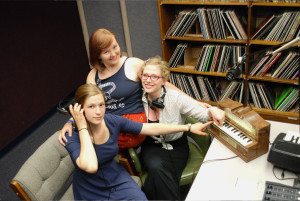 When signing up for clubs in the fall,  few freshmen think about what activities they will still be doing by the time they graduate. But seniors Steph Courtney, Corinne Kocher and Rachel Calvert managed to keep up with their radio show, The Salem Bitch Trials, since their freshman year. Now nearing the end of their time at Lawrence, the three reflected upon their time on air and how their show has changed in the past three years.

The show, which began in the winter of their first year, was started so that more female voices could be on the air. “We had boyfriends or friends who were boys who thought they were really cool because they had radio shows and we were tired of their stupid shenanigans so we got our own,” said Calvert. “We enjoyed listening to their shows, but thought it would be fun to have one ourselves,” Courtney elaborated.

Originally called Ladies Hour, the focus of the show was to “talk about things that we thought were important as ladies, and then also play a lot of ladies centric music,” said Kocher. “And whenever I turn on the radio,” continued Calvert, “nine out of ten times there’s a man singing, so we get really excited about [playing female-centric music], it’s a thing that is lacking here and everywhere.”

Although the show has evolved over the years it has retained that same goal. “We used to really plan out funny things to say and interesting stories, it was half talk and half music,” xxplained Courtney, “and we still have that aim, we still play at least 80% music that features women musicians,” finished Kocher. Both Kocher and Calvert said simultaneously that the biggest change in the show is that “it got lazier” over the years.

The three friends kept up with the show for so long because it allowed them the opportunity to unwind and remain close. “Having a radio show has made us closer, we have a reason to hang out for an hour every week and listen to music and talk amongst ourselves, and I think it’s helped us stay friends over the years and stay close,” said Kocher. “It’s a time to just sort of relax and unleash after the week and hang out with one another,” furthered Courtney.

Courtney, Kocher, and Calvert all agreed that they wanted to seek out radio or similar platforms after leaving Lawrence, although they know it would be a lot harder outside the bubble. However, they still feel confident that they can get their voices out there. “One thing that’s cool is that we live in the digital age, where podcasts exist so we can still do this kind of stuff,” said Calvert. “I keep trying to figure out ways that I can keep making music and listening to music and sharing music. Technology is cool because it gives us so many opportunities to do this.”

The main advice the three women would give to current DJ’s or those thinking about getting shows next year would be to spread the word. “Advertise,” said Calver. “We used to be better about getting our friends to listen to us. Make posters, and get your friends to listen because not enough people listen to WLFM. Make Facebook groups, advertise or else no one will make time to listen to it.” Courtney continued, “It is what you put in. the more we advertised the more listeners we had and the more we cared.” Make sure to tune in to Salem Bitch Trials for their last show, Friday from 5-6 p.m., or, as Courtney urged, apply to work at WLFM to get involved next year.