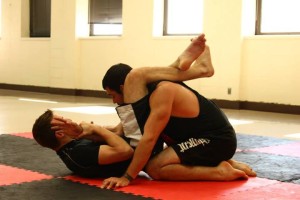 Contrary to that really lame and cheesy movie reference, the Lawrence University Fight Club (LUFC) is quickly taking ahold over campus and everyone is talking about it.

LUFC began as a couple of friends that loved martial arts training together and sharing that love. Eventually more and more people joined, and these private training sessions turned into regular classes of over 20 people.

The core group of Conor Beaulieu, Carl-Christian Valentin and Duncan Lamphere make up the instructors of the club. Although their teaching styles draw from many different martial arts, LUFC focuses mainly on the martial arts of Muay Thai and Jiu Jitsu.

Beaulieu and Valentin handle the bi-weekly Muay Thai classes, while Lamphere is the main instructor for a subsection of the LUFC, the Lawrence University Grappling Club (LUGC). LUGC focuses on Jiu Jitsu techniques.

Muay Thai and Jiu Jitsu have many fundamental differences. “Muay Thai is known as the science of eight limbs,” said Beaulieu. “We use the hands, elbows, knees and feet to make focused and efficient strikes.” Jiu Jitsu, on the other hand, deals more with grapples, holds and momentum to use your opponent’s body weight against him or her.

When combined, elements of Muay Thai and Jiu Jitsu make for a very complete style and knowledge of martial arts.

A very unique characteristic of LUFC is that the classes are geared for everyone, no matter one’s experience. Beaulieu and Valentin stress that the purpose of the club is to teach martial arts and promote physical conditioning along the way.

The club consists of a very diverse membership with people. All members are very determined and ready for a big workout. “The first week will be really, really hard simply because your body isn’t used to moving like that,” said Valentin. “But if you stick with it, it will turn into one of the best things for your body that you’ll ever do.”