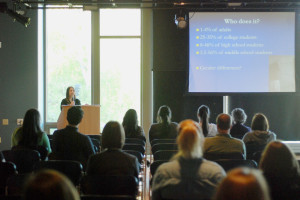 In order to further understanding of the reasons behind a behavior that affects a shocking number of early adolescents and college students, Dr. Lori Michelle Hilt, Associate Professor of Psychology hosted her presentation “Understanding Non-suicidal Self-injury: Why Do People Hurt Themselves?” on the evening of Thursday, May 22 in the Esch Hurvis Studio. It was held in honor of May being Mental Health Awareness month and sponsored by The NorthEast Wisconsin (NEW) Mental Health Connection and WelLU.

The presentation also included information on recognizing warning signs of the behavior as well as resources for peers and parents.

The idea for the public presentation sprang out of a talk held last month at Lawrence by Dr. Thomas E. Joiner on “Why People Die by Suicide,” also sponsored by the NEW Mental Health Connection. At Joiner’s talk, the question of how NSSI relates to suicide came up and sparked the idea to hold a more specific event on the subject.

“We wanted to really bring awareness to mental health and mental illness and to hopefully increase some education around it in our community,” said Amanda Matthews, The Executive Director of NEW.

Among her wide range of achievements, Hilt is a practicing psychologist who has published research on non-suicidal self-injury and co-edited the ‘Handbook of Depression in Adolescents.’ Her work has focused on rumination.

NSSI is not a distinct disorder such as depression, but can occur in the context of a mental disorder. Self-injurers do not intend to commit suicide, but people who self-injure are at a 10 times greater risk of making a suicide attempt than a non-injurer most likely because they have “greater disregard” for their body.

In a community sample, 25-35% of college students and 1-4% of adults reported doing this behavior. People who are transgender or LGBTQ+, are at about a 2.5 times higher risk of self-injury as well.

Hilt suggested NSSI starts due to  multiple factors. Many young adults and teens begin because it is one of the only ways they know how to regulate their emotions.

NSSI is reinforced for some individuals because every time they cut it takes away bad feelings, or creates feeling for those with depression. There is biological evidence that when a person hurts themselves, the brain release endogynous opiates to heal the body .

Interpersonal factors are studied less, but suggest that those who experience social pain and punishment from others self-injure.

When Hilt performed a study with Lawrence students a few years ago, she found that self-injurers may be more reactive to stress and that it might create higher levels of negative emotion for them.

There can be several warning signs. These include cuts, scars, scratches or bruises as well as keeping sharp objects on hand, wearing long sleeves or long pants to conceal scars, frequent apparent mishaps or accidents, suddenly spending lots of time alone, difficulties in relationships, and mood changes are all signs that may indicate an individual is self-injuring.

It is suggested that those concerned make referrals to mental health professionals who treat self-injury or who use highly effective and empirically supported treatment of Dialectical Behavior Therapy (DBT). This includes intensive group therapy and one on one therapy

“I really liked the fact that if you look at the whole thing overall, it’s going towards a holistic approach,” said freshman neuroscience major Deepankar Tripurani who attended the event. “It’s more like we’re going to attack NSSI on multiple fronts like the cognitive reductionist approach from the west and the understanding and acceptance of zen buddhism from the east.”

“Engage in self-care, relaxation, and good emotion regulation,” explained Hilt. Teach problem solving through positive activities available when they feel bad and let them know there are other options to relieve distress.

In order to further understanding of the reasons behind a behavior that affects a shocking number of early adolescents and college students, Dr. Lori Michelle Hilt, Associate Professor of Psychology hosted her presentation “Understanding Non-suicidal Self-injury: Why Do People Hurt Themselves?” on the evening of Thursday, May 22 in the Esch Hurvis Studio. It was…