“I Am, I Will, I’m Afraid” explores queer identity, unites community 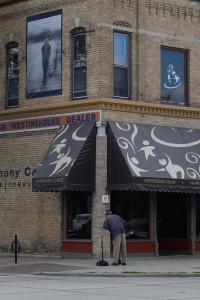 Tuesday, Sept. 16 marked the public unveiling of “I Am, I Will, I’m Afraid (Appleton),” an artistic collaboration between Lawrence’s Visiting Artist Traci Molloy, Associate Professor Benjamin D. Rinehart and the Gay, Lesbian, or Whatever (GLOW) group, as well as Appleton’s LGBTQ youth community and Jesse Heffernan, LGBT Services coordinator at Harmony Café.

Correspondence with Molloy and Rinehart enlightened me as to the process behind this artistic community event. Last spring, LGBTQ participants in this project were called upon to courageously share their beliefs and fears when they were offered the following prompts to finish: “I Am…,””, “I Will…” and “I’m Afraid.”

The responses offered an incredibly intimate glimpse into the fears, strengths and self-awareness that comes with LGBTQ identification. Molloy then traveled back home to Brooklyn and created artwork using the imagery and writing gathered from these participants in Appleton.

A few lines in particular stuck out to me. “I am different.” “I will do whatever I can to survive.” “I’m afraid I’ll never feel at home in my body.”

The project participants’ words are featured prominently in the work. The art piece itself is an enormous vinyl banner that rests upon the eastern façade of Harmony Café. It features a life-sized human subject against the backdrop of an empty field and a dark forest. Words are scrawled across the smoky, black and white image of this person, cutting into the image. The white text against the image represents the responses of the LGBTQ community.

This banner is the second large-scale incarnation of the “I Am, I Will, I’m Afraid” series. A community in Plymouth, Ohio that was ravaged by drug abuse was the first to experience the sense of solidarity provided by such a revealing and transformative project.

After Appleton, the project will travel to Iowa City, Iowa, then to the Bronx, N.Y. and finally to Portland, Maine. Appleton was the only location where Molloy specifically worked with the LGBTQ community as her co-collaborators. According to Molloy, “all of the projects have the potential to travel to different locations,” though she feels “they are always ‘at home’ when they are on display in the community where they were created.

When asked about her involvement with this project, Molloy described her artistic activism. “As an artist, I often work collaboratively with youth. My artwork tends to explore themes of adolescent identity as it relates to topics of race, class and gender,” she said. “This project is a natural extension of my own artwork as an artist and education activist.”

The person featured in this banner is not any one person, the subject is a composite image of all of the participants involved this project—the subject is both everyone and no one. “The medium of photography tends to convey a sense of reality or exactitude to the audience,” said Molloy, who created the image and the text. “The thing that interests me about this piece and this series specifically is that it is a play on standard portraiture.”

Molloy went on to say that “the figures do not exist—they are ambiguous hybrids created by merging together all of the participants in the project. The figure becomes a generic prototype of what an LGBTQ youth from the Lawrence community would look like. The text, though highly personal, also has universal appeal. It too is anonymous.”

This anonymity, hanging outside of one of the most popular coffee shops in town, is beautifully paradoxical. The words are absolutely personal, but they apply to so many experiences. They are private, but they are starkly there for all to see. The figure in the image looks apprehensive, legs crossed one in front of the other, but their arms rest calmly behind their back. The paradox exists both in the image and the words.

Furthermore, the paradox exists in the viewer’s perception of the piece. We see the subject, to whom we may have a split-second reaction, but we are also given access to their thoughts, a vulnerability that often contradicts our initial judgments and that requires compassion and consciousness to try to understand.

The location of this banner serves an important purpose. “Having the vinyl banner in the public sphere demonstrates that under-represented or marginalized groups have a voice in the community,” according to Rinehart, a longtime friend of Molloy who invited her to Appleton for the Fox River Printmaking Workshop.

Rinehart also served as a liaison between Molloy and the Appleton community and was “tickled to see both the Lawrence students and alumni have such a strong showing in conjunction with the LGBTQ Services at Harmony Café.”

This project has a powerful emotional resonance. Molloy believes that “the emotional aspect comes from the connectedness we all share—the piece is really about the human experience, as well as the LGBTQ experience. It is not about creating an ‘us’ and a ‘them’—it is about shared humanity—feelings of vulnerability and courage, fears, hopes and frustrations.”

Rinehart said this work is meant to “empower and support the LGBTQ community and beyond. Many positive changes are happening, however there is still a long way to go toward equality for all people. I also see it as a great educational tool and vehicle to begin challenging conversations.”

The banner will be available for viewing until Friday, Dec. 19. If you ever cross Durkee Street to get off of campus (which I hope you do, it’s good to get away sometimes), I highly recommend you look up above street level and take a minute to experience this art piece for yourself.