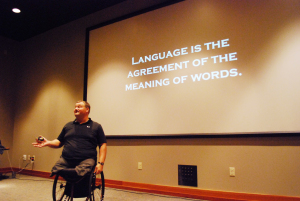 “I don’t bother with matching my socks,” laughed Matt Glowacki last Thursday, October 2, as he lounged in one of the Diversity Center’s armchairs. “It takes too much time.” Sometimes referring to himself as “legless Matt,” Glowacki visited Lawrence to give a lecture called “Diversity According to Family Guy and South Park,” the second in a series of “Diversify your Mind” lectures organized by the Lawrence Diversity Center.

Before his lecture, Glowacki spoke with students in the Diversity Center’s headquarters, located in Memorial Hall, about everything from racism in Hawaii to authentic Wisconsin cheese curds, focusing on what makes people and places unique. He has been to Lawrence several times in the past, and spoke highly of the environment the university has to offer. “I love having the opportunity to speak to small groups before larger groups because it allows me to absorb the culture,” Glowacki explained. “The culture here is very warm…they prioritize my ideas.”

Glowacki also explained why he thinks telling a lie can sometimes be okay. “Pepsi owns Aquafina…but doesn’t advertise for it, because it costs Pepsi more to make Aquafina than Pepsi” is one of his favorite lies to tell at conventions, because “lies inspire conversation, and eventually leads to truth.”

At 7 p.m., Glowacki proceeded to the Warch Campus Center Cinema, where he waited for several minutes for the audience to fill in, which was made up primarily of students, but also included several members of the faculty, and Glowacki’s parents.

Junior Jaime Gonzalez was among those waiting to see Glowacki, and mentioned he had seen Glowacki speak before. “Last time I saw him he was very up front, and eased the tension by lighthearted commenting, but still maintained a serious attitude…overall, it’s just about how to be happy.”

Glowacki’s lecture, which focused on both self-acceptance and acceptance of others, began with a few jokes, then switched to a more serious tone.

“It’s hard to have a conversation with someone about their uniqueness without saying something offensive,” declared Glowacki, explaining that he would not be offended by ignorant comments, instead, he would attempt to educate to prevent them from being made again.

“My disability exists more in your mind than it does in mine,” said Glowacki. “Diversity is not walking around noticing differences in people…diversity is the process we go through of learning about ourselves through other people.”

Glowacki then began discussing the media, specifically television. “[Family Guy and South Park] may be inappropriate, but they teach through satire,” he explained, before showing clips from both series, advocating respect for self and others.

However, according to Glowacki, much of television does not promote a positive world-view. “The fashion industry doesn’t sell fashion, it sells eating disorders” he proclaimed, after showing several images of models suffering from lack of nutrition.

After a serious discussion of the power of words, especially slurs against the black community, Glowacki ended on a positive note. “My favorite part of our democracy is when the people in the majority stand up for the rights of those in the minority.”

Glowacki’s final thought returned to his initial commentary on how to be happy. “Stephen Hawking, when asked how he could be so successful, said ‘I always try.’”