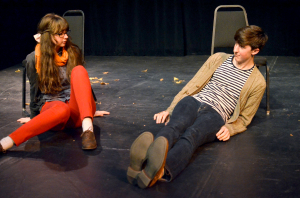 Lawrence Improv: Optimistic Feral Children presented their inaugural show of the 2014-2015 season this past Saturday, Oct. 11 in Cloak Theatre. The show consisted of many interactive games the members directed, sarcasm and ongoing jokes, and much laughter both on-stage and offstage, the performance proved to be a great start to the new school year.

This year, the group is composed of eight members, three of which have just recently joined. Though there was no particular theme for the show, the humorous hour was spent performing a series of collaborative skits, or scenarios, to captivate and engage the audience members.

The stage itself was minimal, with only the black backdrop and two chairs. The first skit was a rotation between four improv team members. The audience was supposed to come up with answers to questions such as “what is something you would find under your bed?” or “what is your favorite color?” and based on the answers, the four members would rotate on stage, acting out a scenario using these words or phrases in their skit.

At first it was hard to distinguish which members were acting out which question because they would act out a scenario to set up the prompt, but later, as the team rotated faster and faster, it was amusing to see how the members had to come up with fast ideas of how to portray their specific prompt through their interactions with their team members.

Senior Portia Turner, and junior Micayla Hutton acted out the answer to “what is something you would find under your bed?” The audience had responded that a monster was something common under someone’s bed, and so during the rotation, Portia and Micayla would act out a scene where the two of them were competing for the best Halloween monster costume. As random as the different scenarios seemed to be, they were highly amusing.

Survivor, was another simple, yet very entertaining, interactive game performed. Starting out there were six members who would act out a scenario on stage. Again the audience was given the choice to pick a daily activity that the members were to act out. Then, after three minutes of acting, the audience would vote who to “kick off the island,” or in this case, stage. This happened until the six members were whittled down to only one person on stage that had to act out the same scenario as if it were a one-man play.

Yik Yak, a very common, yet entertaining distraction for many Lawrentians, was the theme for the game. The six members came up with a creative skit using this prompt, which was both funny and very relatable.

One of the things that was must amusing was the fact that as more and more people were eliminated from the skit, the team would act out their scenario faster and faster.

At the end, it was Hutton who was the last “survivor.” It was hilarious to see her act out all the different parts of the scenario, and even seeing her try to remember the improvised script from when the original six members were on stage. By the end of her solo act, the crowd was hysterically laughing and ready for another game.

Overall, Optimistic Feral Children’s opening fall show was a success. With an attentive and cooperative audience and many funny skits to watch, the members of the improv group facilitated stress relief to their fellow classmates.

As a student-run production, it was very informative to see how well the students had been prepared to engage the audience in the different games and scenarios they were to act out, and how they could relate to the audience as students as well. It was great to see how well the group worked together. Even though it was hard for some of the members to think of something to say right on the spot, there was no sense of anxiety or uneasiness in front of the crowd. The Lawrence Improv team definitely presented a positive start to the new school year.