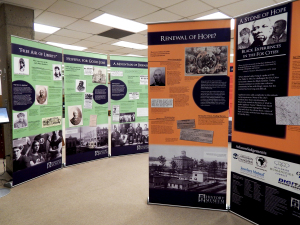 In June of 2014, the History Museum at the Castle began an exhibition intended to bring the stories of African American people in Appleton back into the public consciousness. With the traveling exhibit entitled “A Stone of Hope: Black Experiences in the Fox Cities,” the museum has been able to reach out and tell the tale of this often unseen history.

The traveling exhibit will be touring the region for two years, popping up in schools, libraries and offices, as well as appearing in the mall and the airport. With the support of various organizations such as Wisconsin Humanities Council, Community Foundation and African Heritage, Inc., the research and preparation process took place in less than a year. With twelve panels in total, it offers a broad narrative of Black experience in the Fox Cities from the 1700s to present.

As the marginalized history unfolds, the traveling exhibit may bring surprises to its audience. Alumna Erin Dix, the archivist of Lawrence’s very own Seeley G. Mudd Library, spoke about her biggest discovery in the research.

The exhibit takes the form of a “pop-up” museum, a method that allows for impact on a much broader scale. Since its opening, it has reached an audience of approximately 14,000 people.

When speaking about this creative presentation, Nick Hoffman, Chief Curator at the History Museum, was enthusiastic.

“The real goal of this exhibit is to reach as many people as we possibly can in the community to share this story,” he said. “It does not require people to come to us. We are coming to them.”

However, the small scale of the exhibit has left many things unsaid. Senior Sarah Golden, who worked on the project as research intern, mentioned one of the biggest challenges the research team encountered.

“We had a limited number of panels to work with…so it was certainly a challenge to whittle all of our information down, but we did our best to cover as much as we could,” she said. “This often meant cutting a three-paragraph-long explanation down to a sentence or two.”

Ultimately, the small size works to their advantage. “It can be in the lobby of a small business, sometimes it will be in a school library. We have to make it to be able to fit in any type of space so it works very well as it is,” Hoffman said.

The celebration of Black heritage continues on Oct. 26, when a tribute concert for Marion Anderson, an African American singer who experienced racist attacks multiple times when performing in Appleton, will take place at Lawrence Memorial Chapel. Various artists will take the stage to recreate the same performance Anderson gave on Dec. 5, 1941 at the same location.

The exhibit will be on display on the second floor of the Mudd Library until Oct. 31, when it will continue its tour to the Fox Cities Convention for two weeks, and then to the hallways of Appleton North High School.

To Hoffman, however, there are still more ways to promote awareness of such untold stories and bring them to life.

“No exhibit can fill all the information about a topic […] I will be leading a bicycle tour of local Black history and it will be the second time we have done that. Our first program was filled beyond capacity. There were 40 people [who] came. In those opportunities, we can tell a lot more details about the individual families.”

So if you have not done so, be sure to check out the exhibit on the second floor of the library to have a glimpse of the rich and long-standing history of the African-American community in Appleton.