Colloquia throughout the week address a wide range of topics 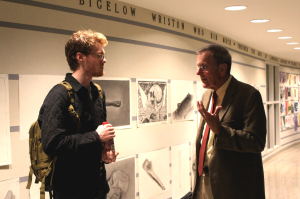 This past week, the Lawrence community played host to four colloquia covering a wide range of topics, from gender studies to chemistry, from psychology to archaeology.

Lawrence Professor Claudena Skran, who specializes in International Relations and refugee studies, spoke on a topic that combined many subjects of her expertise. The talk focused on Sierra Leone, a country that Skran has focused her well-known research and travels. While the colloquium speech addressed the policies of the UN’s refugee agency, Skran spoke about the importance of economic as well as political agency, specifically with regards to female refugees in the area. The colloquium focused on gender, economics, political agency and the importance of the U.N. and spoke to the interests of a large cross-section of the politically aware Lawrence community.

The Lawrence University Chemistry department, in conjunction with the Northeast Wisconsin Chemical Society, brought in Stony Brook University Professor Benjamin Chu to speak on the applications of nano-fibers in modern technology. Chu addressed the two major types of nano-fibers, one of which is synthesized and the other natural. In this seminar, Professor Chu also presented several examples of promising applications of nano-fibers, like their use in reliable water purification efforts. He stressed this applications as well as those which can be helpful for biomedical purposes, can help to reduce human strain on our environment and can extend our medical capabilities. Chu also addressed how he believes nano-fiber technology can be integrated into cost-effective products.

David Stefan Bathory, Psy.D., came from New Jersey to give a talk on the field of Relational Dynamics and its application in the study of psychological trauma. Bathory currently serves as CEO of Bathory International, LLC, a New Jersey-based human services company dedicated to working on solutions to issues related to education, housing and healthcare. In his speech, Bathory first gave a discussion of general thoughts about the psychological effects of trauma before moving on to discuss his particular field of expertise. He defined Relational Dynamics as “a non-linear theory based from work in clinical, developmental, social and personality psychology, as well as mathematical game and chaos theories,” and proceeded to discuss a variety of psychological applications of this theory. In this colloquium, Bathory focused on discussions of psychological trauma in relation to his theory, but he also extended the scope of the lecture by mentioning applications of Relational Dynamics in a number of other, seemingly unrelated fields, including education and architecture.

The Archaeological Institute of America brought in Thomas Carpenter, Professor of Classics at Ohio University, to speak on the cultural and social implications of the focus on non-Heroic scenes in archaic Greek art. In his discussion, he mostly focused on pottery and sculptures from early Greek peoples; specifically, he referenced those depicting scenes from the Epic Cycle, a collection of ancient Greek poems which tell the story of the ancient Trojan War. Carpenter spoke of the interesting nature of the scenes chosen: a common understanding of the heroic values of ancient Greek culture would predict that the art would mostly depict heroic and virtuous scenes, but Carpenter emphasized that the majority of the scenes depicted in this ancient art actually show the less heroic tales. Carpenter made particular reference to art depicting stories such as the rape of Kassandra and the suicide of Ajax, pointing out that these scenes would not be so popularly depicted if they did not have wide emotional resonance to the people of the day. This colloquium talk raised questions about what this art might imply for the values of the ancient Greeks and challenged our current common understanding about ancient Greek culture.