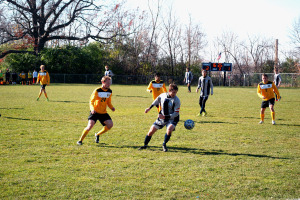 The Lawrence University Men’s Soccer program had a rollercoaster of a year. With a large class of talented sophomores, the team had high hopes for the season.

Unfortunately, the Vikings had to fight an uphill battle from the season’s start. They were unable to register a win until their ninth game, and could not get much momentum until the very end of the season.

Many players on the team felt that the team always had enough talent to succed. In fact, eight of Lawrence’s 11 losses this season were by only one goal. They simply could not capitalize on opportunities.

“The biggest struggle for most of the season was our inability to connect all the way up top,” sophomore defender Dominic Pasquesi said. “We couldn’t find that last pass that gave us the opportunity to score.”

The struggles persisted until Saturday, Oct. 25, in a match against Beloit College. The Beloit Buccaneers were one of the few teams ranked lower in the Midwest Conference (MWC) than Lawrence. And they proved to be exactly the opponent the Vikings needed. Starting off with a 3-0 rout of the Buccaneers, Lawrence was unstoppable at the end of the season. Each of the goals came in the second half of the game, when Lawrence had struggled most throughout the season.

After Beloit, Lawrence Men’s Soccer went on to beat Concordia University Chicago 3-1 and University of Wisconsin-Superior 2-1. This turnaround completely altered the lockerroom attitude and has led to a lot of optimism for next season.

“I’m feeling pretty good,” said sophomore Harry Broderick. “We only lost a few key [seniors], we’ve got a big junior class and it could be a great year.”

Only five current members of the roster will be graduating this year, and there will be another small senior class next year. These factors help set up the Men’s Soccer program for growth and success in the coming seasons.