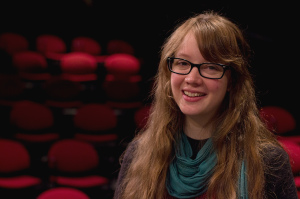 The best art is begotten in conditions of true collaboration. Senior Portia Turner has found this sentiment to be unbelievably true, especially in her relationship with theater.

“Theatre is all a very collaborative process. What is important is people coming together to reach the same end goal,” Turner said. “You are not able to do it without help from everyone else.”

This mindset was instilled in Turner very early on. Theatre runs in the family.

“My parents are both involved in theatre so I’ve been seeing shows since I was born,” she said.

Her involvement continued into childhood, both in New Mexico, where she grew up, and Wisconsin, where she moved in eighth grade. In New Mexico, Turner found a lack of theatre motivated her and inspired her to keep going.

“I had to drive to the other side of town, and I had to pay for it and all of that. Just having those years where theatre was not easily accessible and not easy to do, having that time away from it, really reminded me how much I needed it in my life,” Turner said.

In Wisconsin, she found theatre was more easily available. Turner had a chance to hone her craft. But, theatre was not always the plan. She came to Lawrence with intentions of being in the con.

“I was planning on majoring in clarinet and doing theatre on the side. But, I did not get into the conservatory, which was the most freeing thing ever,” Turner commented. “Now I had the option to actually go do theatre. There was a mental block to try and not follow my family. I broke through it, and I’m glad I did.”

After this blessing in disguise, Turner went on to be involved in at least one production every term she’s been at Lawrence. This includes stage-managing many shows here, including a main stage production of “The Plough and the Stars” her sophomore year. Eventually, during the fall of her junior year, she directed a 90-minute version of “As You Like It.”

Turner also participated in Lawrence’s initiative to start the Greyfell Theatre Company. She is currently co-director of the improv team on campus, Optimistic Feral Children, and Empress (President) of the Lawrence Society of Drama.

Recently, Turner decided to truly test her directing skills with the development of her own Senior Project, “Almost, Durang,” with fellow seniors Sarah Tiano, Caitlin Wittner and Katerina Kimoundri.

Turner described the title as being homage to play “Almost, Maine.” In the production, disconnected scenes were strung together on a common theme, as is done with the vignettes in “Almost, Maine.” The juxtaposition created between humorous scenes of the everyday and dark monologues of the inner mind highlighted the role facades play in everyone’s life.

“These people [particularly Tiano’s character] that look normal can actually be suffering a lot and confused on the inside just as much as the people who are outwardly showing it,” Turner said.

She plans to move to Chicago after graduation. There she will continue directing, improv and comedy. Theatre will forever be a part of her life.