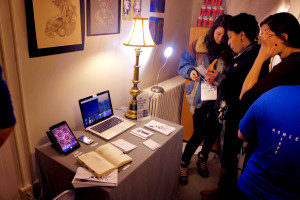 The first thing that happened when I arrived at Art House’s gallery showing, which took place Wednesday night on February 11, was the door being slammed in my face, with the plea to come back later when they were ready. Turns out I showed up early, but I learned when I came back five minutes later it wasn’t by very much. They’d merely been putting up the finishing touches, which was apparent the second I got back.

There was a poster on the door—where there once was none—of a stick figure dead on the ground. Disturbing, but then I opened the door, and it was forgotten in an instant. A warm feeling of dizziness washed over me and all who entered after. The small room in which the residents and friends of Art House had organized for their display was teeming with life, some thirty-some deep with people with more arriving every few minutes. The air shook with the sound of excellently curated shoegaze and punk music, and the aroma of pizza hung in the air like a cloud.

Yes, the name of this particular gallery show was “Pizza Planet,” in honor of the fictional venue that appears in Pixar movies. In their infinite generosity, Art House supplied various Topper’s pizzas to match up with the name of their temporary venue, and they were delicious.

The gallery itself, as mentioned before, was a student’s room, sheets draping the furniture, concealing it, removing the personal to reveal the work that was on display. There was a wide variety, and the artists were all present to discuss their works. I saw one of them dressed in garbage bags, graciously showing off her creations.

Creation in general was the theme, though the members and curators of Pizza Planet insisted there wasn’t one. But everything artwork was distinctly made. There was no found art or art made just by slapping a label saying “This is Art” on it. Each piece was carefully conceived and crafted.

The variety of these artworks was commendable, far more than what you see at the average gallery showing. There were sculptures—one of them a skateboard painted with the two stars of Comedy Central’s “Broad City,” but amusingly retitled “Board City” – and highly detailed works made with pencils and acrylics—a particular standout was a sketch of a skeleton wearing a mask made of muscles, anatomically correct and absolutely terrifying.

There was also video, like the one where a surreal projection of a labyrinth made of bricks played on the ceiling, and every time you looked up, it’d be in a different place, disorienting you at every turn. There was even computer generated work of architecture, such a castle made of polygons and primary colors, reminiscent of an early Frank Gehry project. Not even text was ruled out, with a text messsage about penises the artist wrote, screen-shot, printed and displayed on the wall.

Even the pamphlets were good, in a digital font with crude drawings that resemble Don Hertzfeldt filling up the pages, amusing you but not distracting you from the names of the artists who made the various works.

Halfway through the show, the stereo stopped, and the turntable—which had blocks put on top of it spelling out a welcome message—slowed and halted. Someone stepped forward, a saxophone in their hand. They began to play, not loudly, not with flash, but softly, with substance, a wavering solo that cut through the air like a laser, warbling like the world’s jazziest songbird. It wasn’t even five minutes, but the applause was the equivalent as if we’d just heard a three hour masterpiece. Of course, it was deserved: you couldn’t pull your ears away even if you wanted to.

The same principle, of course, applied to the art on display. Nothing on display was any less than compelling. You had to see it. You had to see everything. Most promisingly of all for the “Pizza Planet” artists? You’re going to want to see more from them all, and soon.