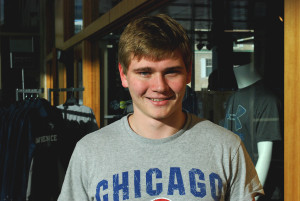 Jackson Boeh is a freshman pole vaulter and 4×4 runner for the Lawrence Track & Field Team.

Antioch, Illinois. The small, focused classrooms, I just felt like I fit in here.

In Illinois it is required to take four years of P.E, and I had a P.E teacher that did not like me because I was a football player, so to get out of his class, I had to join a varsity sport, and the head football coach was one of the track coaches, so I joined track.

You also play football, what have you brought from football into Track and Field?

Making every rep count. For football, we would practice what the offense would run, and pole vault is an extremely technical sport and it takes an extreme amount of reps to be good at it.

How has transitioning from high school athletics into college athletics been?

Everyone that competes here has a drive to be on that team, everyone wants the team to succeed in every aspect of the word. In high school, some people do it because they want to be with their friends, they treat it as a social gathering.

How has being an athlete influenced you academically?

It has made me make the most of the available time that I have. It hasn’t influenced me as much as a student, honestly.

What do you think you have brought to the team so far this season, and what do you hope to continue to bring in the next few weeks?

I have been the “when we need someone, I’m there” guy. If we need a relay guy or a guy for an event, I’ve been able to step in. I hope to be able to start getting points for pole vaulting.

What’s a fun fact about yourself?