Athlete of the week: Travis Charlow

Deleted Author and The Lawrentian Staff·
Athletes of the WeekSports
·February 20, 2015·3 min read 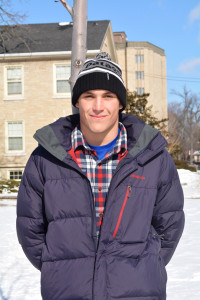 This week, I sat down with freshman Travis Charlow of the Lawrence University Men’s Swim Team to discuss his first year of collegiate swimming and his performance at the conference championships at Grinnell College. This past weekend, he set personal bests in the 50, 100 and 200 backstroke, and 50, 100 and 200 freestyle.

Gabe Chapman: How would you describe your first year of swimming for Lawrence?

Travis Charlow: I had a lot of fun with the team. It was a small guys team—which I was kind of used to from my high school, but it was intense training and I really liked Drew [Fleek] as a coach. He’s a good guy and he knew what he was doing.

GC: What are some of the pros and cons of having a really small team?

TC: Cons are that dual meets don’t go so well—we can’t really fill up depth—but a pro would definitely be that we got a lot closer together. As five guys it was super easy, just hanging out together and staying in contact with each other. But we can’t fill up all the lanes for an event, and when you get to conference and 80 percent of your team is standing up on the podium because there’s only four people it kind of hits home. But we did the best we could, so it’s cool.

GC: What did you think of your first Conference Championships?

TC: I thought they were a lot of fun. I thought I did really well and Drew prepared me very well. I worked hard all season and I was really happy with the outcome. Five lifetime best times is something that people strive for, but I wasn’t the only person on the team and I think everybody did a great job. I was very happy with how I did and how the team preformed.

TC: Yeah, it was outstanding. Some of those times I’ve been trying to chase since my sophomore year of high school. I had a really good year that year and haven’t been able to get back until this year, so it was a lot of pressure lifted off my shoulders for next year.

GC: What’s kept you motivated throughout the season?

TC: Personally it was not letting the other guys on the team down. Like if I don’t wake up for morning practice there’s one less guy there, and if there’s one less guy then there’s almost no one. So no days off, and if anybody missed a day we heckled him a little bit being like ‘where were you’—just joking around. But it was something I didn’t want on my back, so I was motivated to be there all the time. I think it worked really well.

GC: Do you think you had a smooth transition and easily got along or fit in with the team?

TC: I’d like to think so. I think it was a lot easier there only being a handful of guys, but I think that at first it was kind of rough because I didn’t know anybody. I guess another downside to having a small team would be that there’s not much diversity. But I think it went very smoothly and they are all very nice guys, and that was very helpful.

GC: What are you looking forward to for the future for your swimming career or the LU team?

TC: Well I kind of joked around with the guys that I hope to see the guys’ team having enough people in the next three years to fight for spots on our relays at night (at conference) instead of skipping (the B and C races) in the morning and just doing the relays at night—which is a lot of fun—but I think it would be fun to have some competition. It was super exciting to watch Taylor Winter (of the women’s team) make an NCAA B-cut in the 1650 freestyle, so I was hoping that maybe in three years I’ll be able to make a B-cut and head to nationals. That would be super exciting. I also have some sights on some records on the board in the pool area. I think I was three seconds off the record in the 200 freestyle and seventh all-time in the 200 backstroke. So I’m looking to improve up that ladder and make number one eventually.