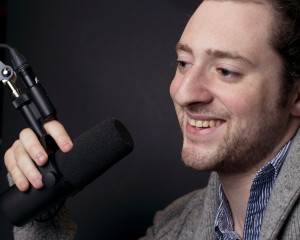 One of the greatest joys an artist can experience is world-building. What starts as a few simple ideas in one’s head can bloom into an enormous creative effort. Take, for instance, the wizarding world of “Harry Potter” that J.K. Rowling weaved through prose, or the wondrous unknown corners of space that Gene Roddenberry conceived in “Star Trek.” Imagination is powerful. Ideas gain traction and snowball into amazing creations. On Lawrence’s campus, a student has created two such universes. Except, in this case, senior Peter Raffel uses both radio and the written word as his media of choice.

An English major with a creative writing minor, Raffel’s creative inclinations are clear in his academic pursuits alone, but he is also the station manager at WLFM, Lawrence’s radio station. Here, he hosts his weekly show, “On Patrol,” a two-hour comedic romp through puns, pop culture references, ridiculous guest stars and recurring in-gags.

Raffel got involved with WLFM immediately after coming to Lawrence his freshman year. He has been writing and hosting “On Patrol” for the entirety of his university career.

On this show, he plays a heightened caricature of himself à la Stephen Colbert. The show incorporates monologue sections, interviews and various bits of craziness. For instance, frequent guest star and friend senior Morgan Ann Gray has come on the show performing as Bob Dylan, a girl with a boyfriend named Matt, a musician trying to cash in on the folk craze, a movie producer and Matt himself. One of the show’s plot-lines involved Raffel’s ‘intern,’ junior Will Fraser, going on strike, with Fraser calling in lawyers and actively trying to take down the show as an arc in the show’s overall narrative.

“I love being able to create this world through radio,” Raffel explained. “It’s a long-form type of creative expression. It has a pulse to it, builds up to certain moments.”

The world that Raffel and his friends have created is decidedly “Simpsons”-esque. The creative process essentially involved spitballing crazy ideas, coming up with witty insights and then rolling with them. This results in a wide array of eccentric characters all with interconnected lives and plotlines.

Next week, “On Patrol” will take the form of a play called “Bar Mitzvah Crawl.” It concerns the plight of Sal Schwartzman, who never had a bar mitzvah because he got his hand stuck in a vending machine on the intended day. This is informed by Raffel’s own experience not having a bar mitzvah, although he did not, in fact, get his hand stuck in a vending machine. In the present day, then, Schwartzman’s friends decide to take him out on a 13-pub bar crawl as a way to make up for missing out on this pivotal event.

“What I love on the show is just taking one joke and hammering it away until it’s like a whole radio play,” Raffel continued. “Like having a joke you made with friends and taking it to an extreme.”

In addition to the radio program, Raffel is a writer of prose. His honors project took the form of a novel titled “The Love of My Life.” The novel tells the story of a man going through his life in India. The novel touches upon themes like isolation, feeling simultaneously attracted to and repulsed by an object and reaching for happiness in an impossible situation. While these more serious existential themes are transferable to any person in any walk of life, Raffel wrote the novel while studying abroad in India and was thus inspired by the setting.

This striking dichotomy between the communal, comedic radio show and serious, self-reflective prose are representative of Raffel’s external and internal personas.

“In the external world, I can be very humorous and engaged in comedy,” Raffel said. “It’s a place for those musings that are a little more trivial, things I just pick up on and things that are kind of absurd. The creative writing is a lot more insular, introverted, a much more solo thing, where I’m going beneath the surface of what’s on my mind on a day-to-day basis.”

Aside from writing and radio broadcasting, Raffel is a member of the swim team and a senior class representative for LUCC.

Whether through the introspective world of “The Love of My Life” or the bombastic world of “On Patrol,” Raffel has produced an impressive creative output over his time in college. And what is most important, he has created numerous characters, places, events, jokes, observations, diatribes, monologues and ridiculous conversations that did not exist before he wrote his novel or put on his show. With help from friends, Raffel has created his own universe.

On Patrol is broadcast on WLFM from 7 to 9 p.m. on Mondays. Check out the first half of Bar Mitzvah Crawl next Monday, March 2, to see just what kind of a universe Raffel has made.