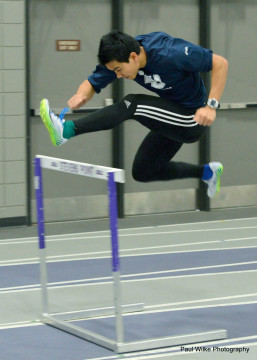 The Lawrence Track and Field team competed in its final meet of the indoor season this past weekend at the Midwest Conference Championships hosted by Grinnell College in Iowa. Out of 10 conference teams, the men’s team placed sixth overall while the women’s team placed ninth. The two-day meet was highlighted by several conference victories and many personal bests, resulting in an expectation to continue this positive momentum into the outdoor season.

After having only four meets this season, the Vikings approached this weekend with a certain amount of apprehension. “Going into Conference is usually a lot of nerves because sometimes you’re not 100% sure if you’re ready,” says junior distance runner Cam Davies, “We remained positive however, and showed up to compete.” Based off of the meet results, members of the team undoubtedly were able to overcome their nerves.

Highlights from the men’s team include individual conference championships from junior JP Ranumas who won the 60-meter hurdles in 8.71 seconds, beating out the second place finisher by .08 seconds, and freshman Max Edwards who ran his 5-kilometer race in 15:44. Edwards went on to take fourth in the 3-kilometer race in 9:05 followed closely by the reigning 3K champion Davies, who took fifth with a time of 9:08. Also of note was freshman Ethan Gniot’s third place finish in the 800-meters in 1:58.43, just 1.06 seconds off the leader.

On the women’s side, junior thrower Genna Matt took fourth in the weight throw with a throw of 14.26 meters, effectively breaking the old school record set by Brielle Bartes ‘14. Freshman Erin Schrobilgen took eighth in the mile with a time of 5:25. Her 10:48 time in the 3K was also good enough for eighth. The sprint medley, consisting of freshmen Kendra Thomas, Janey Degnan, Noelle Hele and senior Anna Bolgrien, finished their 1600-meter relay in a time of 4:28.78. With the addition of sophomore Kate Kilgus, Hele, Degnan and Bolgrien returned the next day to take sixth again in the distance medley relay.

Overall, the team was happy with their performance despite a difficult indoor season with the tough training weather, the stress of Winter Term, and the departure of several upperclassmen from the team. “I don’t think anyone walked out of that meet thinking that they did not give it their all,” reflects Davies. “At no point during the year have I felt as positive about the future of this program.”

Moving ahead, the Vikings look forward to the spring for warmer temperatures and training on the snowless track at Alexander Gymnasium. Look for this young Viking team to continue with their forward momentum and to make big statements in the upcoming outdoor season.