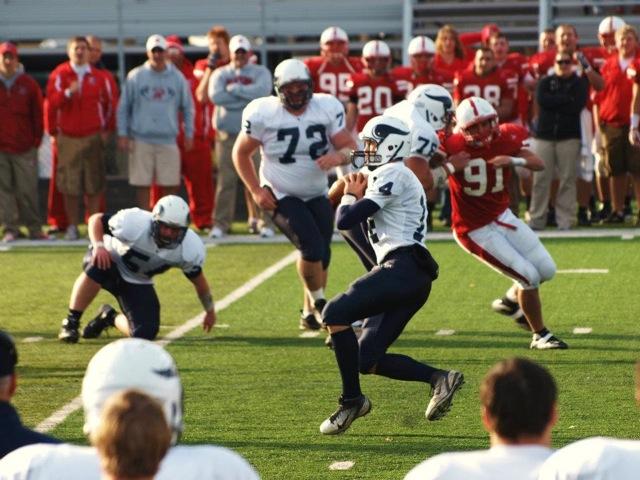 The Vikings fell 50-20 Saturday to their biggest rivals, the Ripon Red Hawks, ending their season at 1-9.

Ripon received the kick and scored on their first drive of the game, but Lawrence responded quickly with their own score. Sophomore Luke Barthelmess connected with sophomore Dominique Dirden for six yards, senior Jon Bruehl for 13 yards and junior Tyler Mazur for 36 yards into the end zone. Lawrence missed the extra point attempt, giving Ripon a 7-6 lead. Ripon scored on their next two drives, and the first quarter ended in a Ripon 21-6 lead.

Sophomore Sam Wagner intercepted the ball at the Lawrence 30 and zigzagged his way all the way to midfield to get the Vikings rolling in the beginning of the second quarter. On their next drive, Viking sophomore Shawn Martin rushed for five yards into the end zone, followed by two Ripon field goals from the 54- and 24-yard lines. The Vikings headed into the locker room at half time trailing 13-27.

The first play of the second half resulted in a 41-yard rush for a Ripon touchdown. The Vikings scored their final touchdown of the season from a 60-yard catch and run by Bruehl in the third, his fifth of the season. At the end of the third, Mazur completed a 25-yard pass to Dan Taylor of off a fake punt to get the first down, but the offense could not manage to get the ball past the Ripon six-yard line. Ripon scored three more times, finalizing a Viking defeat.

Barthelmess went 19 for 38 passing for 292 yards. Mazur had seven catches for 89 yards and Bruehl had six catches for 141 yards. Wagner paced the Viking defense Saturday with eight tackles, one tackle for loss, and one interception. Senior Mats Jonsson had six tackles, and sophomore Hunter Kopitzke and juniors Sam Ausloos, Nick Randall and Jon Hope each had five tackles.

Bruehl finished his senior season with 40 catches for 896 yards and five touchdowns. Mazur had 63 catches for 878 yards for 11 receiving touchdowns, along with five rushing touchdowns, which ties the Lawrence record at 16. Barthelmess had 202 completed out of 363 for 2,721 yards this season.

Sophomore Nick Schubert said, “With our football season just concluding this past weekend, it’s now time to get back to work again preparing for next year. We will lose several seniors this year who we will all miss, both on and off the field. However, we have a solid core of underclassmen that will be returning. This year didn’t quite pan out exactly how we all wanted and we will be training intensively this offseason to improve to where we need to be.”

Senior Ryan Shaw said, “My four years playing football here at Lawrence University have been a fun and one of a kind experience. Although the 2011 season did not pan out the way we had hoped, I will always cherish the relationship I had with all of my teammates and I really believe that this season will serve as a building block in the future of our program.”

Shaw continued, “The solid core of new recruits over the last few years and the steps that Coach Howard has taken bodes well for the team next year and the following years to come. Our future success comes with the support of the Lawrence and Appleton communities.”