Since her rise to fame and infamy over 40 years ago as a key member of the American Communist Party and the Black Panthers, Davis has established herself as one of the most insightful social critics and essayists of the second half of the 20th century. Davis was barred from teaching by then California Governor Ronald Reagan, reinstated, chased around the U.S., called a domestic terrorist by Richard Nixon, arrested and ultimately acquitted.

She writes and speaks on a variety of subjects, such as prison reform, racial discrimination and social justice. The Rolling Stones wrote a song about her—“Sweet Black Angel”—and a character based on her was a major subplot in the classic 1976 dark comedy “Network.”

Davis’ talk was prefaced by several speeches, award presentations, essay readings by students, and a musical performance by former and current members of Lawrence’s Black Student Union. The theme of the night was “Breaking the Chains of Injustice.”

Davis discussed a range of topics, including institutionalized domestic racism and the Black Lives Matter movement. She spoke on the work of King and how it relates to current struggles—both at home in the United States and in the struggle for answers in Palestine. In doing so, Davis highlighted King’s lesser known ideas on seemingly contemporary issues.

Davis also addressed the prison system as it stands in the United States, specifically the unprecedented number of people imprisoned at much higher rates than in other nations. She advocated for abolition of the prison system, arguing that such punishment perpetuates rather than solves the real problems of convicts.

The talk was well attended by community members and Lawrence students alike. In fact, an overflow room with the event webcasted on a screen was set up in Stansbury Theatre to accommodate the large crowd. Davis’ lines were often met with snaps or applause. 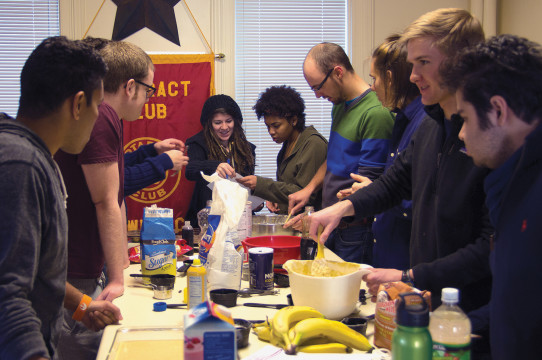 This past Monday, Jan. 18 marked the 25th annual Martin Luther King Jr. Celebration hosted by Celebrate Diversity Fox Cities and Lawrence University. Angela Davis, a prominent civil rights activist and this year’s keynote speaker, addressed a completely full crowd in the Lawrence Memorial Chapel. Since her rise to fame and infamy over 40 years…