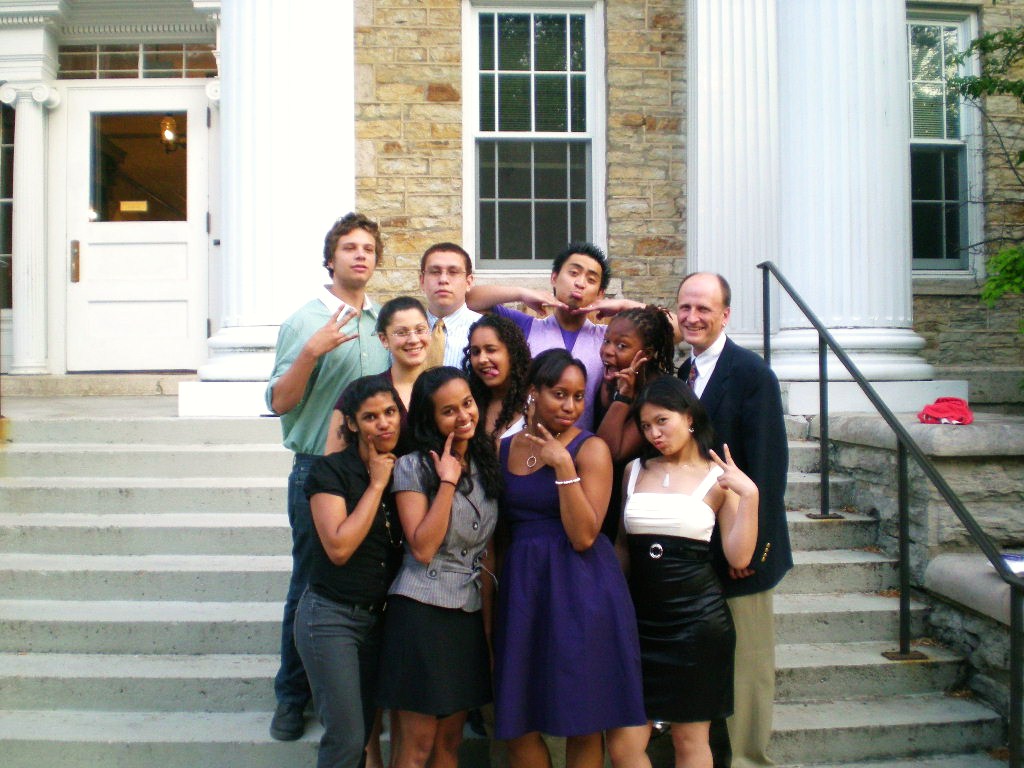 After arriving on the Lawrence campus four years ago, Lawrence’s first Posse scholars will be graduating in June.

Founded in 1989, the Posse Foundation is an organization that recruits public high school students with extraordinary academic and leadership potential to attend elite liberal arts colleges and universities. These students receive four-year, full-tuition leadership scholarships from Posse’s partner schools, such as Lawrence.

The Posse Foundation’s goals are to promote more diverse student bodies on college campuses and to provide a support structure for student demographics that may be otherwise overlooked by the traditional college selection processes. “The main thing we wanted to do was diversify the student body,” said Provost and Dean of Faculty David Burrows. “Not just in ethnicity, but in geographic diversity as well, which benefits the whole student body.”

Lawrence began its partnership with the Posse Foundation’s New York City branch in 2006. Viktoriya Sionov, Raymond Verceles, Jismy Raju, Jake Hartmann, Mei Xian Gong, Silvio Marquez, Driftnery Martinez, Dorcas Montes, Jasmine Peters-McClashie and Isake Smith were the first 10 Posse scholars to attend Lawrence University in 2007, making them Posse 1. Of the 10, nine will be at commencement, celebrating the undeniable impact they have made on Lawrence during the past four years.

In addition to creating student groups and providing a new prospective during class discussions, members of Posse 1 have opened Lawrence to processing controversial topics through its Posse Plus Retreat. Held in Björklunden each year, the Posse Plus Retreat allows current posse scholars to invite Lawrence faculty, staff and students to join in on a weekend of discussion, debate and collaborative learning.

“This year’s topic [at the Posse Plus Retreat] was the millennials,” said Posse 1 member Gong. “It was about our generation and what we want out legacy to be… It was very important for us to realize and discuss this, but I feel that on campus there are not many opportunities for us to do that. In classrooms, we don’t share this very much. By sharing what we think at the Posse Plus Retreat, we can talk about topics that matter to us.”

What’s especially unique to the Posse Foundation, however, is that students are not simply awarded scholarships individually. Rather, for each Posse partner school, the 10 annual award recipients work closely with each other, allowing them to function just as the organization’s name implies — as a posse. The 10 train together through extensive pre-colligate meetings and workshops prior to starting college. This helps form a bond between members of the posse, allowing them to act as a support system for one another once on campus.

“In freshmen and sophomore year, that’s when we needed each other the most — that’s when we really needed our Posse,” said Gong. “It’s very hard for everyone to go to college and meet new friends, but by having a posse, it’s a very unique experience. Sometimes we needed someone who lived in the same place as us to understand how strange and shocking it was to come here. As the first posse, we did not know what was expected of us. But I believe my Posse has done a great job of showing Lawrence what we are capable of.”

“It was really hard for us as the first Posse to come from far away,” Posse 1 scholar Verceles added. “In our freshman year there were a lot of people who doubted the program. But with new Posses coming in every year, that doubt has decreased.”

According to Professor of Physics Matthew Stoneking, Posse 1’s mentor, Posse 1 has made an extraordinary impact on the university. “The character of the student body has transformed over the last four years,” he shared. “Lawrence’s partnership with The Posse Foundation has played a significant role in that transformation and will continue to do so.”

After taking on the challenge of being Lawrence’s first Posse, Posse 1 has succeeded in mastering the art of “trusting the process,” which every Posse scholar will tell you is key. To date, there are four posses at Lawrence, and Posse 5 will be entering with the class of 2015 this fall.

After graduation in June, members of Posse 1 will be going their separate ways. No doubt, they will continue to emerge as stand-out leaders, making important strides in all that they do.

Raju will be taking on a full time position as an underwriter at Chairman of Travelers Insurance. She interned at the company for two summers, and was personally offered the position by the CEO last summer. Verceles will be attending NYU for a 15-month accelerated nursing program, and Gong will be going to graduate school at the University of Pennsylvania for her Ph.D. in chemistry. Montes will be working towards certification as a child protection investigator, followed by getting her Master’s in social work. Sionov is interning at with Harlem United AIDS Community Center for the summer and will move on to enroll in PA school. Smith will also be interning at Harlem United over the summer. She will go on to work towards enrolling in graduate school to earn a Ph.D. in counseling. Peters-McClashie will be volunteering in a health clinic, and then going on to graduate school for a Master’s degree in public health in community health. Additionally, Hartmann will be working at an audio/video company in New York City and Martinez will be working in the citizenship and immigration services field. Following, she will be enrolling in law school for immigration law.