The annual celebration of Lunar New Year at Lawrence University took place on Saturday, Jan. 30. This family-friendly celebration of the event brought together not only students, but also Friendship Families, Fox Valley residents, faculty members and staff, offering a bonding experience for everyone in the greater community.

Lunar New Year is the most important festival in many Asian countries, including Korea, China and Vietnam. It originated from celebrating the first day of the year based on the lunar calendar. At Lawrence, students from these countries and various club members participate in commemorating this holiday. The Lunar New Year celebrations featured various multicultural activities, such as Chinese and Japanese calligraphy, tasting traditional Korean tea, trying on traditional Asian outfits and experiencing unique fortune telling. The organizing committee also invited engaging guest performers to represent a wide variety of Asian cultures and ethnicities.

Freshman Vy Ngo shared her experience of participating in this event. As a student from Vietnam, she helped people experience the multicultural activities and introduced the culture of her own country. She said, “Learning other cultures, eating international food and dressing in my traditional outfits [is] so exciting. This event helped me overcome my homesickness, and I hope this event goes on for the future generations as well.”

Senior Jason Park, who has been hosting the show for the last three years, was also excited for Lunar New Year. He originally started as a representative of the Korean Culture Club, but now, his feeling of duty to convey Korean culture to the Fox Valley community has become the primary motivation to organize this event. He believes the participants in this event grow close to each other and that the event builds a strong group bond. He said, “This group has already become a family for me [over] the past years. As we introduce other cultures such as Japan that [do] not necessarily celebrate this holiday in their own [country], I think the true value of Lunar New Year lies in its inclusivity that mingles a variety of international cultures and people in one place.”

Director of International Student Services Leah McSorley, who is also responsible for organizing this event, showed her affection for this holiday. She said that one of the most interesting moments in preparing Lunar New Year is finding the performers from off campus. Although it can be difficult to coordinate outside performers, McSorley believes it is worthwhile because an event such as the Lunar New Year celebration plays an important part in cultural learning. “I would say how thankful I am for the student leaders, because in addition to their regular club duties, they go beyond being a part of [the] Lunar New Year Committee and represent their culture by organizing this whole event,” she added. “And as an Appleton native, I am happy that people in my city can learn the various cultures of the world.”

The celebration started from a student’s desire to celebrate this Asian holiday in America. Despite being in existence at Lawrence for a long time, the event is still evolving each year. Students who experienced this event all share their common enthusiasm in witnessing this harmonious, energetic cluster of people from different countries. 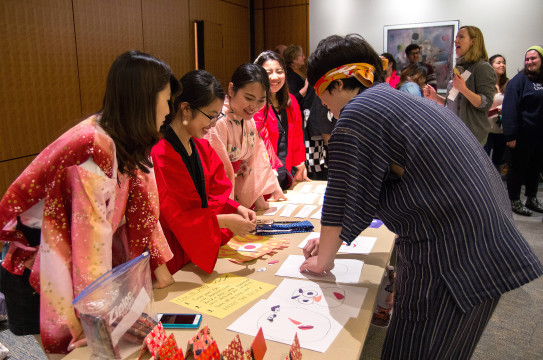