The 81st annual Lawrence Winter Carnival festivities ran from Wednesday, Feb. 3 to Saturday, Feb. 6. As part of the yearly celebration, Campus Life and a variety of student organizations come together to plan a wide range of activities to brighten up the dark winter days.

The festivities kicked off on Wednesday, when students were invited to attend back-to-back men’s and women’s basketball games against St. Norbert College. Students flocked to Alexander Gym to root for their peers and revel in the friendly competition of this annual event. The Lawrence Melee dance team finished out the night with a showing of “Take the Lead,” a 2006 movie which highlighted the value of ballroom dance.

Thursday’s carnival events encouraged students to relax and enjoy the winter months with an evening showing of the classic hockey movie “The Mighty Ducks.” Lawrentians over the age of 21 were also able to attend a special session of trivia in the Viking Room (VR).

The VR further kicked up the festive environment on Friday evening with a Winter Themed Happy Hour. Gaming Club took over the Pusey Room for a special event—Games by the Fire—where students could stay warm by the Pusey hearth while playing both card games and board games. Students were excited about the 5 v. 5 Broomball Tournament which opened Friday night, wherein five teams began a two-day competition.

Also on Friday was the LU Symphonic Band concert in the Chapel. Junior Jordan Peterson described the concert’s second piece, “Pacem,” as “so incredibly beautiful.” She continued, “The band just played so lyrically, and with so much expression. It was amazing to hear.” Student Organization for University Programming (SOUP) brought in comedian Brian O’Sullivan, who sang, strummed and joked through his hour-long slot. All of the staff of Sage Hall collaborated to organize an after-hours 80’s-themed pool party at the Buchanan-Kiewit Wellness Center pool, a well-attended party which gave students a summery break from the Wisconsin February. Finally, Lawrentians could go to the Warch Campus Center Cinema to watch the cinematic masterpiece “Penguins of Madagascar,” a fittingly energetic end to such a rowdy evening of Winter Carnival festivities.

The final day of the 81st Winter Carnival was packed with activities. “Penguins of Madagascar” returned bright and early for an encore presentation in the cinema, finishing just before the kickoff of the lively Carnival Jumble. Held jointly on Boldt Way in front of Warch Campus Center and on the Main Hall Green, the Jumble was a chance for many different student groups and activities to mingle and celebrate the Carnival’s last day.

Ambitious students carved large blocks of ice into wintry art in front of the cafe, cheered on by a crowd of onlookers. Multiple attendees expressed excitement about the activity. Several club representatives looked on, advertising their clubs and handing out festive goodies in the process.

Meanwhile, over on Main Hall Green, five Broomball teams continued their epic battle. Students carpooled to the Appleton Family Ice Center at 7 p.m. to watch the LU Men’s Hockey team take on the Milwaukee School of Engineering (MSOE) in an evening match.

Throughout these events, many student organizations took up the responsibility of warming up the festivities with an array of hot beverages. SOUP’s hot cocoa and cookies on Wednesday evening in the Diversity Center was followed by “Phi Cocoa Tau” Thursday in the Steitz Hall Atrium. The Tea Lovers’ Club made an appearance at the Saturday Carnival Jumble on Boldt Way, sampling many varieties of their signature beverage. Meanwhile, Habitat for Humanity handed out still more drinks as part of their charity fundraising efforts.

Saturday night finished out the festivities. Hundreds of students packed into the Somerset Room for the annual President’s Ball. At this iconic Winter Carnival dance, students listened to a live big band, snacked on crudités and chocolate fountain treats, and danced the night away. 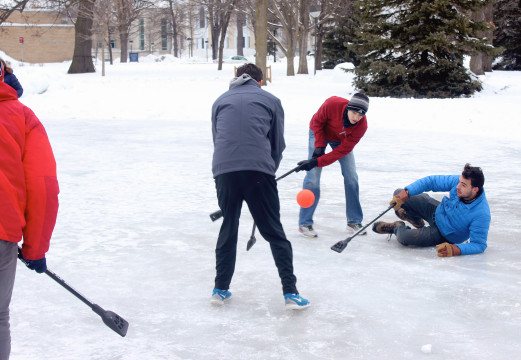 The 81st annual Lawrence Winter Carnival festivities ran from Wednesday, Feb. 3 to Saturday, Feb. 6. As part of the yearly celebration, Campus Life and a variety of student organizations come together to plan a wide range of activities to brighten up the dark winter days. The festivities kicked off on Wednesday, when students were…