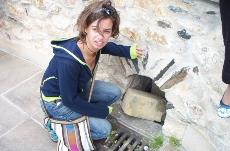 We lost each other as we blindly waded through the crowd that gathered around Brandenburg Gate. I stood next to strangers getting drenched in the rain, their attention fixed ahead to the Staatskapelle Berlin orchestra. They just finished playing, and were leaving the stage to a roar of applause. No one around me held an umbrella, no one pulled the backs of their coats over their heads and no one cared that they were soaking wet.
I felt the emotions of the German people as they celebrated the 20th anniversary of the fall of the Berlin Wall. I was allowed to commemorate this historic event with them and celebrate their freedom.
My eclectic group of friends, who I could no longer see in this veritable sea of humanity, was composed of German majors from different universities across the U.S. and abroad. We met at orientation in the International Education of Students center and got to know each other through late night excursions to the nearest open bar.
We bonded over their cheap alcohol and my lone pint of soda in a fancy glass with a lime wedge. We spoke German in our classroom at 8:15 in the morning, slipped into our native tongues under the influence and conversed in English somewhere in between. They shared my love for music and old rock groups and took me to my first U2 concert during the week of celebrations in remembrance of the Berlin Wall’s fall.
U2 was here for the MTV Europe Music Awards but held a free concert in Brandenburg Gate as their way of saying “Happy Birthday, Berlin.” We climbed and sat on a fence to look over the heads singing along to ‘Magnificent,” off of U2’s latest album.
The show lasted almost 45 minutes, a majority of which we spent on the fence until security guards came to scold us down. As we listened, sang along with and screamed our hearts out to U2, I felt as though so many of these songs fit the occasion, as if they had been written with Germany’s past in mind.
When Bono sang the words to “One,” our eyes followed the light projectors that traced the words East and West onto Brandenburg Gate. They stood still for a moment before joining to form “One Love.”
I thought back to the U2 concert as I listened to world leaders and politicians talk about the date’s significance and its place in history. I looked around to see the German people cheering, laughing, crying and hanging onto each and every word that was said.
Bon Jovi took the stage to a huge ovation and sang a new song called “We Weren’t Born to Follow” that referenced Berlin in its lyrics. Those who were familiar with the song sang along, while others who listened joined in at the end. The evening’s festivities ended when Polish politician Lech Walesa toppled a wall of over 1000 dominos adorned with German graffiti. They fell back one after the other as the crowd watched in silence until the final colorful brick crashed onto the wet floor.
The crowd erupted into cheers and I laughed and clapped along with them. I looked around to find a familiar face to smile at or laugh with but saw none. And yet, I no longer felt like I was alone in this crowd in a foreign land a million miles away from home. We were a part of it all. We weren’t strangers, we belonged. 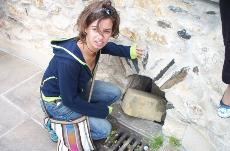