The Clean Plate Challenge from the other side of the bucket

Greenfire will sponsor events throughout the year to promote food-waste awareness.
Melody Moberg 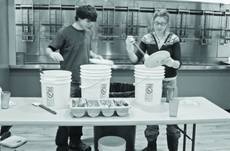 Last Wednesday and Saturday I found myself wearing plastic gloves, an attractive opaque apron, a thin film of dinner and a smile, attempting to summarize the mission of Greenfire and briefly outline key reasons for waste reduction while balancing plates and scraping leftovers into buckets.
Performing this activity clarified items to avoid for my own meal, and how quickly small instances of waste, when multiplied many times, become a significant problem.
I scraped for Greenfire’s annual Clean Plate Challenge, a waste-awareness campaign lasting from Monday, Jan. 25 to Sunday, Jan. 31 during the hours of 5-8 p.m. in Andrew Commons.
Members of the campus environmental group Greenfire collected students’ plates and scraped waste into three different buckets: inedibles – napkins, rinds, cores and bones – food waste and liquid waste. We measured total waste in pounds.
Over the week, diners discarded 1,151 pounds of consumable waste. The most wasteful night was Monday with 195 pounds of consumable waste, and the least wasteful night was Saturday, with 141 pounds. 35 pounds of napkins were thrown away Wednesday and Thursday nights, and 97 pounds of beverages were discarded Friday.
In previous years, the Clean Plate Challenge was exclusively orchestrated by Greenfire, but this year, it teamed up with Bon Appétit, which is currently involved in a national food waste reduction campaign. Greenfire decided to align the two events. However, aside from Bon Appétit’s support and advertisements, the bulk of the effort still came from students.
The objective of the Clean Plate Challenge is to raise awareness about food waste. Greenfire does try to quantify the amount of food waste and to compare this data to previous years, but because this is only a secondary objective, the results can be statistically problematic.
For example, many students wondered why Greenfire advertised the Clean Plate Challenge, and why it scraped out front. Because of this visibility, the numbers may not accurately reflect the waste generated on most nights, when pressure to reduce waste may not be as acute.
However, despite these problems, it appears as though this year compares favorably to years past. In a 2008 Clean Plate Challenge, nearly 500 students eating at Jason Downer Commons between 5 and 7 p.m. discarded 80 pounds of food waste and four gallons of beverages.
Reasons for waste reduction may include better quality of food, controlled portions through being served by dining services staff, and trayless dining, which forces students to take smaller portions and come back for more. Bon Appétit started the “trayless revolution” in campus dining.
The primary reason Greenfire is concerned about food waste is because of its sobering environmental effects. Food waste cannot undergo the natural cycle of decomposition in landfills, causing it to release methane, a gas more damaging to climate change than carbon dioxide. The EPA claims that landfills account for 34 percent of all methane emissions in the U.S.
The U.S. Department of Agriculture states that Americans throw away more than 25 percent of all food produced for domestic sale and consumption in the U.S., and a 2004 University of Arizona study places the figure at closer to 50 percent. Additionally, this same study found that Americans spend $43 billion on wasted food every year.
Many of the questions Greenfire scrapers received centered on the final destination for the food waste – “is this getting composted?” Unfortunately, we had to answer “no.”
Bon Appétit currently composts about one metric ton of pre-consumer produce waste through SLUG each week, but cannot compost post-consumer waste. Lawrence is currently looking into purchasing an industrial composter, which would be able to compost post-consumer waste including napkins and non-vegan items such as meat and dairy, but it is looking cost prohibitive. A composter would likely be $200,000-$300,000.
Co-president of Greenfire Brittany Oleson reiterated that the purpose of the Clean Plate Challenge is awareness, not judgment, or forcing students to consume items they do not enjoy.
By being conscious of the environmental issues surrounding food waste and food origins, we can inform our own decisions – using the available tasting spoons to try items before piling them on our plates, by taking smaller portions and coming back for more, and by reducing our consumption, and especially waste, of foods with hefty carbon footprints, such as meat or pineapple.
Greenfire intends to do more Clean Plate Challenge events on a smaller scale throughout the rest of the school year – measuring waste over lunch, weekend brunch and breakfast – and seeing how those numbers compare to dinner.
Sunday, Feb. 7, Greenfire house members will be in the Parrish and Perille dining rooms throughout the entire dinner period, available for feedback on the Clean Plate Challenge or to discuss Greenfire. Anyone is welcome to e-mail Greenfire with comments at greenfire@lawrence.edu. 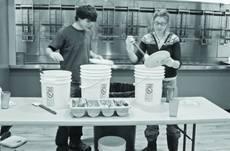