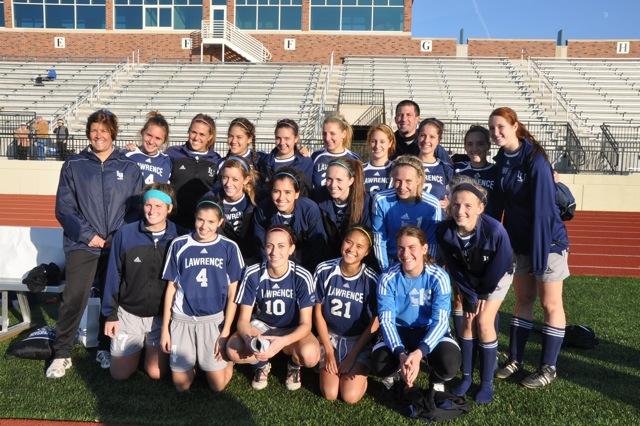 The playing season ended for the Lawrence women’s soccer team with a 4-1 loss to the St. Norbert College Green Knights. Despite the season coming to a close, Coach Lisa Sammons felt good about the season as a whole.

“I feel we grew as the season progressed and it all seemed to come together at the right time,” said Sammons. “Graduating eight seniors last year meant there were a lot of new people in the starting lineup.”

St. Norbert took the initiative in the first period and scored the first goal of the game. However, Lawrence came back and tied the game up on a 3-1 breakaway that ended with a goal by freshman Keli Muchowski. Unfortunately, that would be the last goal scored during the game by the Vikings, as the Green Knights scored another goal in the first half, and then two more in the second to make the final score 4-1.

Sammons noted that the team possessed the ball well, and they did. The Vikings got in 11 shots at St. Norbert’s goal, only two less than the Green Knights, but a combination of good goalkeeping on the part of St. Norbert and missed shots by Lawrence worked against the Vikings.

Although the season ended earlier than she would have liked and the team will again have some key players graduating, Sammons felt optimistic about heading into the next season.

“I am very proud of what we accomplished this season,” said Sammons. “Would I still like to be playing? Yes, but getting to the conference tournament for the third year shows that we are consistently competitive. I am excited to see what next year brings. We have some strong players returning and a good looking prospective freshman class.”