This weekend Prescribed Escape Productions (PEP) performed their version of Shakespeare’s Pericles. The show had something in it for everyone, from pirates to shipwrecks to a family reunion. The cast was excited to share their experience with The Lawrentian of working on the production for five weeks.

Senior Olivia Gregorich, President of PEP, was the director for the show. Gregorich was involved in organizing props, costumes, posters, stage direction and coordination. The main challenges Gregorich faced were making the story accessible for those who have never performed Shakespeare or those who have not seen Shakespeare and, of course, coordinating everyone’s schedules. Some of the themes she wanted to bring to life in the performance were honor, virtue, friendship, family and what it means to be a good ruler. ““Pericles” is more than a love story, it is a reunion of a lost family,” said Gregorich.

“Pericles” was originally planned to be performed in the Esch Hurvis room in Warch, but Saturday’s performance was moved to the Wriston Art Gallery. Gregorich thought that the art on the walls actually enhanced the minimal set and reflected some of the themes in “Pericles.” Music also played an important element in storytelling. Junior Elliott Dryjanski provided the score inspired by their fellow actors. Also playing three other roles, Dryjanski said he had more fun performing in Wriston as the cast was relying more on the art to visually tell the story. Dryjanski has performed in “Rocky Horror” for three years, and when Olivia was recruiting musicians, Dryjanski was willing to volunteer.

Sophomore Mia DeLasho, a member of the PEP board, enjoyed doing some minor work on script cutting and revision. Along with the rest of the cast, DeLasho went to rehearsal with energy and ideas to make the story come to life. DeLasho, who was in PEP’s production of “Alcestis” last spring, enjoys the ensemble experience. “Everything gets done as a team effort and I really like that. It really helps everyone to be invested in the show as a whole, not just individual scenes that they appear in, and I think that investment really comes across in the storytelling of the production itself,” elaborates DeLasho. “I really enjoyed the camaraderie and friendships I was able to build in a short span of time. I think this is one of the most organized groups on campus,” added Dryjanski. 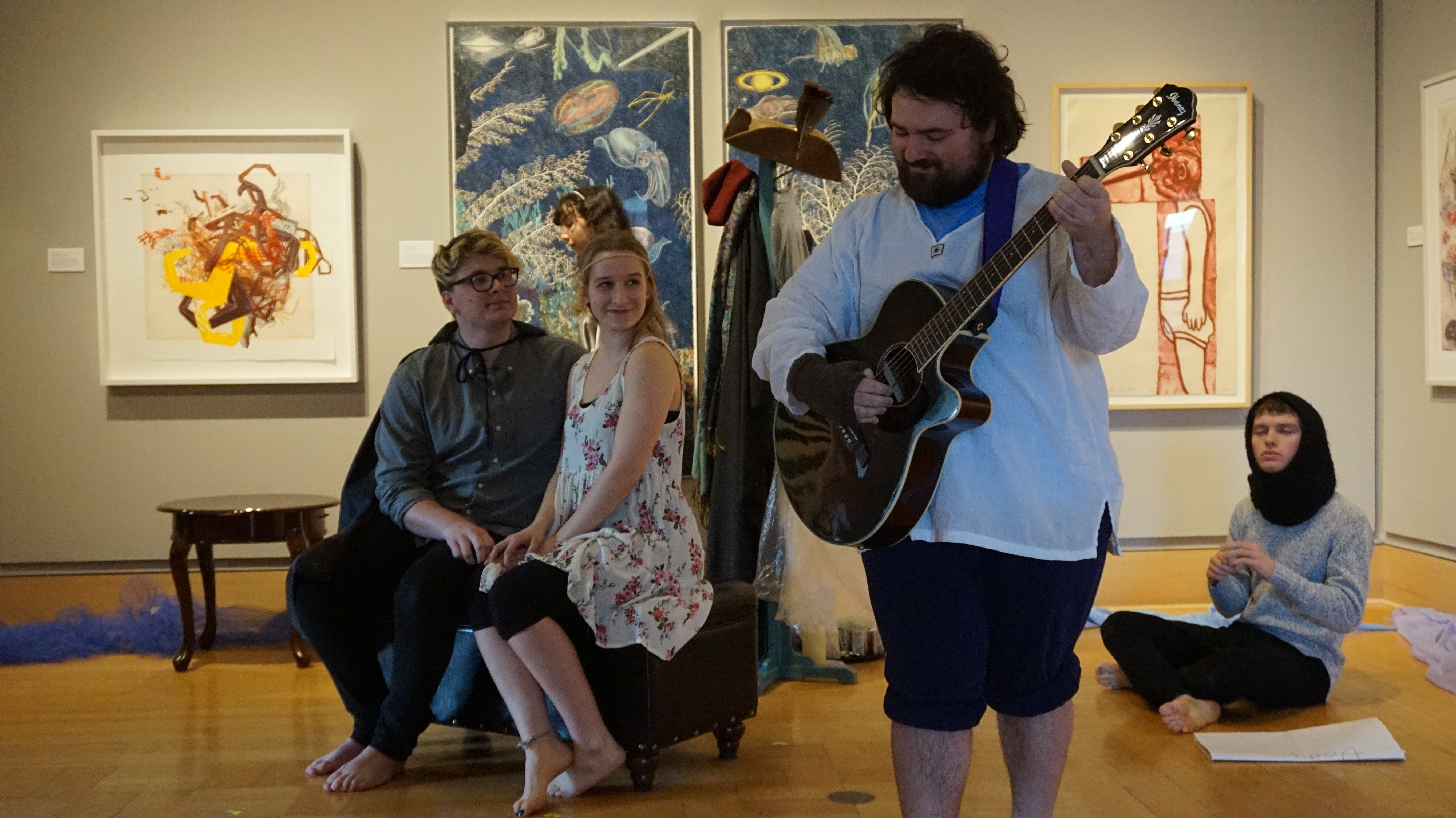 Senior Kyle Labak takes the spotlight in the production.
Photos by Larissa Davis

Much organization is put into the production. DeLasho would describe the production process as “well-intentioned chaos.” The play is selected in fall term giving PEP time to cut the script. The play is selected through a careful process of avoiding shows that the department has done in the recent past and ruling out shows that simply will not work for logistical reasons. The cast is selected through an audition process where a monologue does not need to be prepared. Everyone is simply matched to a part and given five weeks to rehearse.

“Pericles” presented a lot of fun challenges that Olivia and the PEP board were very interested in tackling. The play itself is “completely over-the-top ridiculous” and “so off the beaten path” according to the cast members. The scenes were done in a small space with a reasonably small cast. Some challenges the actors had faced included having an onstage shipwreck or tossing a coffin overboard, where they had to think creatively about how to accomplish that on a modest budget and minimal set.

“This play is like if Shakespeare and Monty Python had a baby.” said DeLasho. “Each scene gets more and more quirky and improbable [so] we just decided to take the play at its silliest and move with the story’s heart where we found it. It’s a goofy ride but at its heart the play is about families that love each other for different reasons and in different ways, and I’ve found that part of it to be really beautiful.”

PEP is a fun, non-stressful way to do theater on campus. Anyone who has participated in PEP agrees that they ended up forming little families and making friends they would not have met otherwise. Dryjanski was happy to work with an “incredibly bright and incredibly talented cast.” When about her favorite part of performing in PEP productions, DeLasho enthusiastically responded, “Shakespeare gives you so much freedom to explore and learn as you are storytelling, and I think PEP does a really good job incorporating all of those experiences into one big story that we get to share with campus when we’re finished.” Gregorich was impressed by this year’s cast members. “As soon as they walked into the room they already felt like a family,” added Gregorich. “The main goal is to have fun and we have achieved that.”

PEP crew members perform ‘Pericles’ in the Wriston Art Galleries. This weekend Prescribed Escape Productions (PEP) performed their version of Shakespeare’s Pericles. The show had something in it for everyone, from pirates to shipwrecks to a family reunion. The cast was excited to share their experience with The Lawrentian of working on the production for…