Momodu Maligi wrapped up the lecture with a Q&A session.
Photos by Emily Midyette.

In the final lecture of the Povolny Lecture Series of 2016-2017, Momodu Maligi ‘04 explained the state of politics and the necessity of expanding trade in his country of Sierra Leone.

The lecture took place in Steitz Hall Room 102 on May 8, and was well attended with around 60 people looking to learn more about politics and trade in developing countries. It was titled “Beyond Diamonds—Trade, Water and Development in Africa,” and in it Maligi explained how developing countries like Sierra Leone need to target sectors of their economy to improve and expand infrastructure in order to reach a necessary level of trade.

Maligi was sent to the U.S. in 1995 when he was a young boy. After growing up in the U.S. and completing a bachelor’s degree in government and international relations from Lawrence and a master’s degree in international commerce and public policy from Valparaiso University in Indiana, he returned to Sierra Leone to attempt to improve his native country. After spending around a decade gaining experience in different sectors of Sierra Leone’s economy, Maligi now serves as the Minister of Water Resources, a tough job in the water-deprived African country. 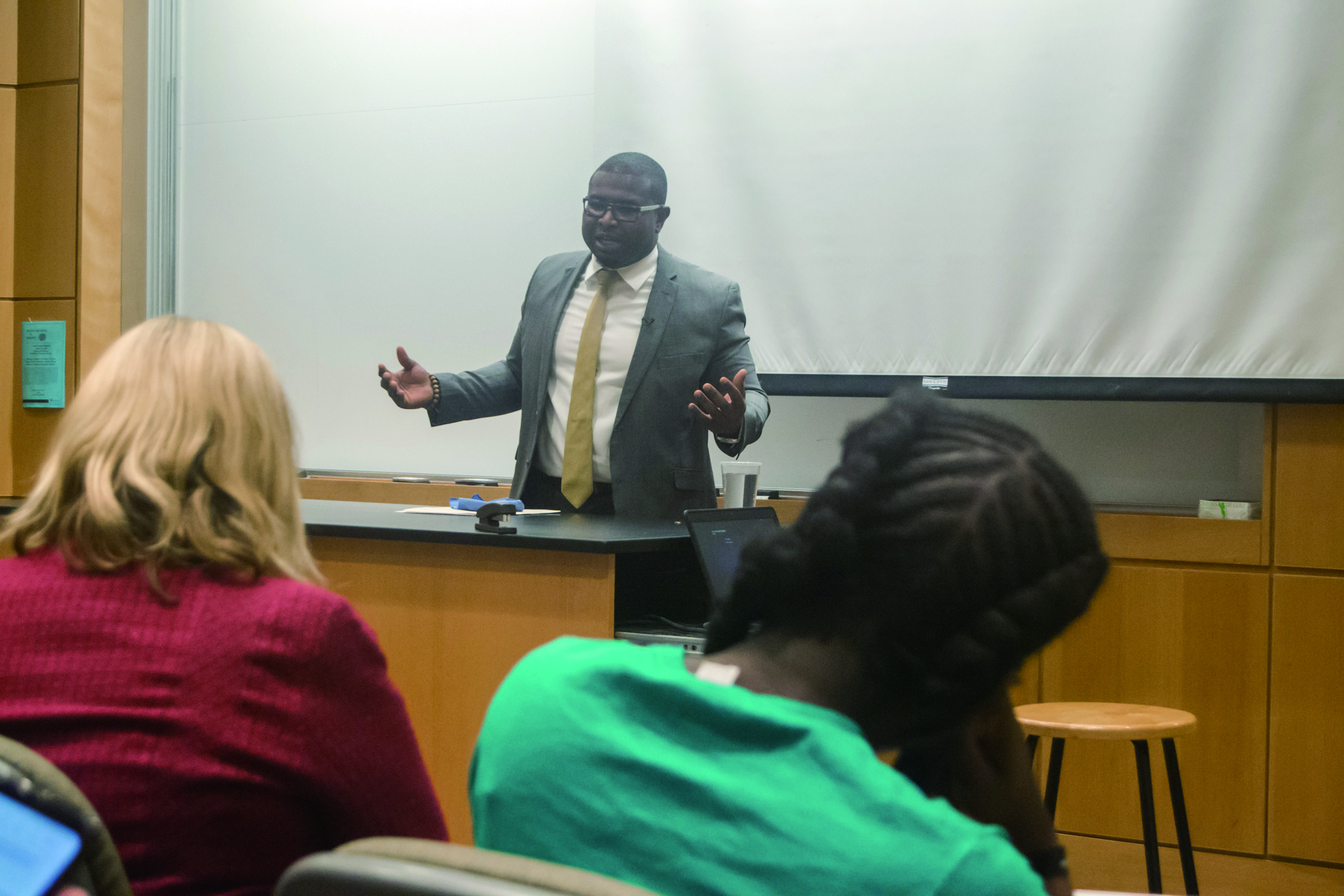 Maligi’s lecture began with a description of the situation in many African countries. They are rich in natural resources, but have not reached their full potential as predicted by their resources. This is due to a variety of factors, primarily among which tend to be the lack of resources for large-scale infrastructure projects, lack of foreign direct investment (FDI) and a mismanaging of resources due to corruption. He then explained another major factor stilting their development: the resource curse. “The resource curse is the fact that developing countries rich in natural resources tend to experience more violence and bloodshed than other countries.” In Sierra Leone, the multitude of diamonds was partially responsible for the horrible 11-year civil war from which the country is still recovering.

The question is what to do with these natural resources and how best to use them to grow the country. As the Minister of Water Resources, Maligi is in a vital position for answering this question. “We are working for a sustainable management and supply of water,” he said. Throughout this process, “human dignity and security must be achieved, and they need economic and financial security with a strong legal framework.”

By setting up a strong infrastructure and framework for water management, Sierra Leone could not only solve their water shortages but also turn water into a tradable commodity. “Expanding trade is essential for a developing country,” said Maligi. Trade facilitates exports, broadens purchasing options, encourages innovation, lowers prices, encourages foreign direct investment and cuts government spending. Serving in the government means figuring out how to expand trade. “In my opinion, there must be targeted growth efforts in certain sectors, as this will allow necessary sectors to expand and compete,” said Maligi. Perhaps the most important sector is transportation, since it directly supports trade.

Even though Maligi has done a lot, there is much more to do. There are still poor levels of water sanitation in many areas, especially urban centers where the groundwater is locally polluted by the lack of central water treatment infrastructure. Levels of education are lowered by the necessity of spending hours a day fetching water, and waterborne illnesses still cause sickness and death.

Then, the lecture moved into a comprehensive Q&A session. A member of the audience asked about the responsibility of mining, as mining is one of the primary sectors of the economy that the government is trying to expand. Maligi explained that “the first thing we did with mining was establish a strong Environmental Protection Agency as well as a National Mining Agency.” These agencies will carefully regulate the mining and set regulations to protect the local environment.

Another audience member asked his opinion of Non-Governmental Organizations (NGOs) as well as other similar organizations, and if he had any pet peeves about them. He started off by saying that one-size-fits-all approaches don’t work, and they usually work under the assumption that they do. He also commented on the hypocrisy of many people in NGOs, who assume that everyone in these countries they are helping is corrupt, but are also quite corrupt themselves. There is also generally a lack of respect for the countries they are helping.

In response to a final question, he ended with advice to current Lawrence students, “Don’t take Lawrence for granted. Use the opportunities here to make yourself a better person. Take advantage of this time to engage other people and make yourself a better person. Talk to the faculty. Lawrence is a bubble, but there are plenty of challenges within this bubble. If it’s not a bad place, don’t make it one. If it’s a good place, make it better.”

Momodu Maligi wrapped up the lecture with a Q&A session. Photos by Emily Midyette. In the final lecture of the Povolny Lecture Series of 2016-2017, Momodu Maligi ‘04 explained the state of politics and the necessity of expanding trade in his country of Sierra Leone. The lecture took place in Steitz Hall Room 102 on…