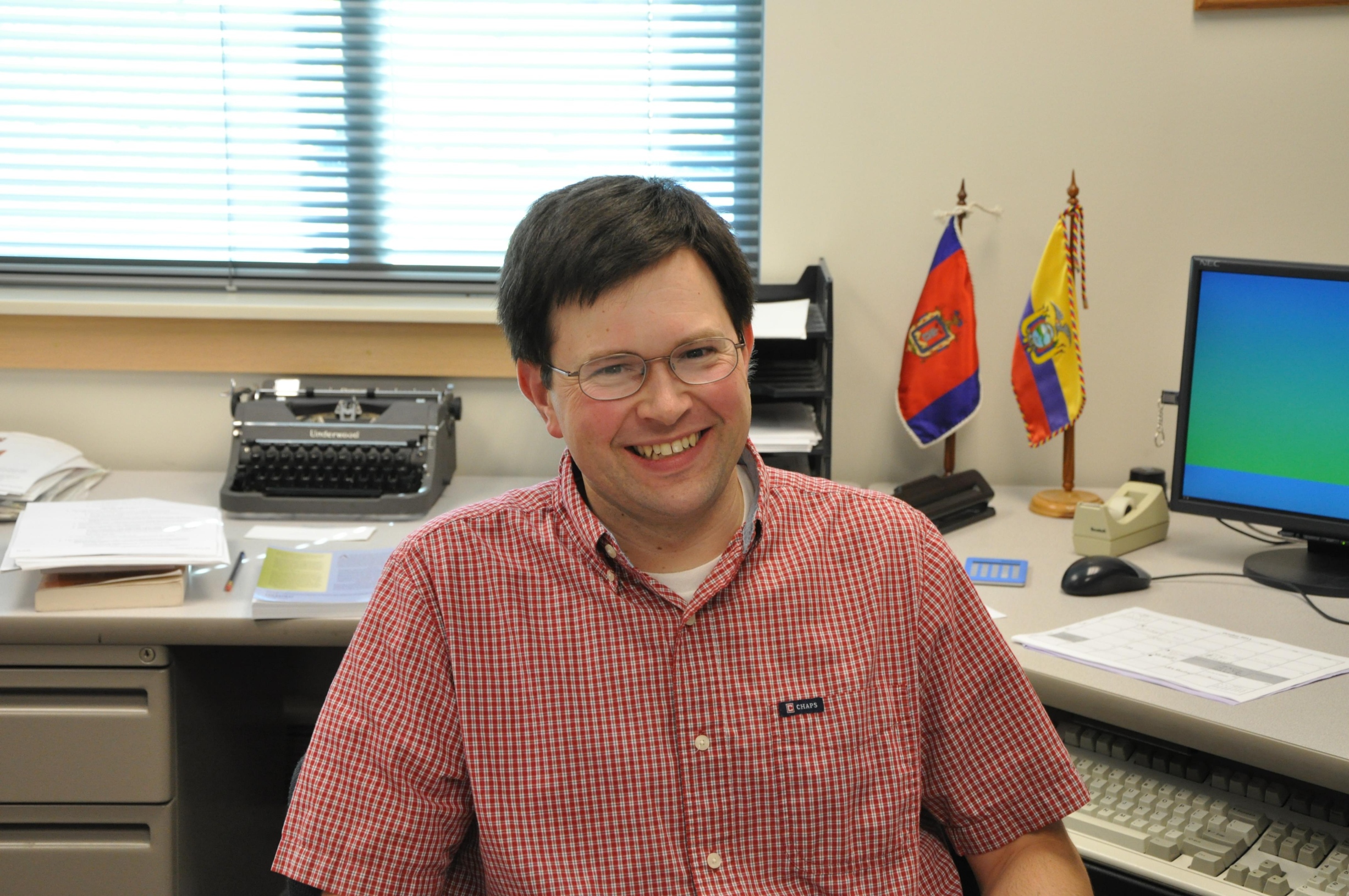 Assistant Professor of Government Arnold Shober says he “isn’t really from anywhere,” but has lived in Wisconsin, Texas, Florida, Colorado and Ecuador. He received his undergraduate degree at Bradley University in Peoria, Illinois, and his Ph.D. from the UW-Madison. Shober credits his experience at Bradley as being one of the reasons he was interested in working at small liberal arts schools following graduate school. “I wanted to create the individual learning experience that I had there for others,” he says.

RY: What was it like moving around so much when you were younger?

AS: Well, there were advantages and disadvantages to it. The disadvantage of it is that you never get very familiar with the place. Considering that I’m interested in political science, I realize that when you’re living in many different places, you never get a chance to fully understand the local politics. You also can’t set down roots very well.

However, there are also advantages to this, because as someone who doesn’t set down roots, you can better understand, I think, anyway, the big issues in the society. You think ‘Well, this might work here in America, but over there they do it differently, and the world hasn’t ended!’

I think the benefit of having moved around a lot my whole life is that I try to portray a sense in my teaching that things could be different, having seen many different ways to do things. Actually, my time in Appleton is the longest I’ve ever spent in one place.

RY: How is it that your family ended up in Ecuador?

That was a great cross cultural experience, though I’ve forgotten most of my Spanish. I can read it, but don’t put me on the spot! I haven’t had much of an opportunity to use it since in a more realistic context. I really appreciated the experience there, though. Again, you see the world from a different point of view when you are living overseas. You’re kind of like an American, but kind of not.

RY: What is your concentration in the field of political science?

AS: Well, I do American government, but what I like best is education policy and public policy. I find these two areas are where there is a lot of action in government. Many people talk a lot about elections, voting, partisanship, or international affairs, but all of that is really a precursor to someone sitting down and saying ‘here’s what we should do, we should tax these people this much, we want these requirements in place, etcetera.’

All of those decisions affect how well the rest of government works. People must realize that someone has to figure out those fundamental decisions, because those are the ones that we live with every day. They are much larger than the size of the federal deficit, or healthcare reform.

Actually, what’s most important is how government is actually implemented. Education policy is really my focus, because what I think is interesting is how democracy functions in a school system that isn’t very democratic. When a school mandates that a student has to take certain classes, and that they don’t have any options, what is the appropriate balance for that? When should there be local control, when shouldn’t there be?

RY: Are you following the 2012 presidential hubbub?

AS: Yes, ‘hubbub’ is the right word. One of the amazing things this election is that the number of debates has skyrocketed. It used to be that candidates didn’t want to get into debates because they were afraid of making a mistake. And of course they will; they’re under pressure, and they’re humans.

However, something has changed in our politics that we expect people to go on 80 different shows. I’m not really following them at the moment because we have to wait for things to shake down a little bit, it’s really early on still. Mostly for my own sanity, I try to take political news in smaller chunks until the media starts to call and ask about candidates. I have classes to worry about, and frankly there are other things I like to do with my time.

RY: Yes, what do you do in your free time?

AS: Well, I like to garden. I have a nice vegetable garden. I don’t do flowers; flowers are for other people. We bought our house in Appleton because it had a big yard, so I love to be outside. Our family likes to go biking, hiking and on walks when we can.

Unsurprisingly, I do like to read. I’m in a faculty book club here, and that supplies my ‘fun’ reading these days. We just finished reading the book “Bourgeoisie Dignity” about the growth of the modern economy. We’ll also be reading a book about a physicist and his studies. I like reading books outside of my area, that’s where the fun part comes in.

I do like to cook, but there isn’t as much time for that anymore. Sometimes we have good meals, lots of times we have popcorn. I play the piano, though not nearly enough for Con-level quality. My daughter is taking lessons now. Because I have three children, most of the music listening I do is pieces they’re playing. I do like to take advantage of concerts at the con and recitals, and I do like to go to volleyball games when possible.