A member of the Oneida Nation of Wisconsin performs a traditional dance.
Photo by Emma Gilshannon

As an alternative to Columbus Day, Indigenous People’s Day was celebrated on the Main Hall Green on Monday. The event began with a cleansing ceremony conducted by the president of the Lawrence University Native American Organization (LUNA), senior Lauren McLester-Davis. Afterwards, attendees were invited to try traditional indigenous tea and bean soup while contemporary Native American hip-hop music played on the speakers. A sheet was handed out at the table with a list of “inventions and products we can credit to indigenous societies,” such as maize, chocolate and rubber, among others.

Two groups performed for an audience of students, faculty, administrators and Appleton locals. The first was the Ballet Folkórico Nacional de Milwaukee, which specializes in the dances and traditions of the Mexica, or Aztec people. The four performers consisted of three dancers and one drummer, all of them dressed in traditional feathered headdresses and brightly colored clothing, along with some ankle ornaments that rattled every time their feet touched the ground.

After the first few dances, one of the performers took a few moments to talk about some aspects of the display. The audience learned that the ankle ornaments are known as cascaveles and that the dancers attempt to match the stomping of their feet with the beat of the drum. The atuendos, or large feathered headdresses, were only worn by the nobility, priests and other higher ups. The atuendos were once adorned with Quetzal feathers, a colorful but highly endangered bird found in Mexico and Central America, but now are made only with pheasant or peacock.

It was also emphasized that any performance is only a representation of Mexica culture, as traditions and dances have been passed down through countless generations and centuries and one can’t know for sure if it is exactly like the original. “We do lots of events throughout the year,” said Ballet Folkórico director Javier Escamilla. “The purpose is to preserve our culture. We don’t just do Aztec, but all Mexican indigenous cultures as well.”

The second half of the event was a performance by members of the Oneida Nation of Wisconsin, which is a federally recognized branch of the tribe based outside of Green Bay. They led off with the lively Old Moccasin Dance, which was displayed by about a dozen young Oneida members in traditional, light wear. According to the group, the story goes that the elders would watch the young ones as they danced the Old Moccasin. Whichever of them knew all the steps would be honored with a new pair of moccasins, as they would be the ones to carry on the dances and traditions to the next generation.

The audience was treated to several more dances, including the Smoke Dance, the Jingle-Dress Dance, the Fancy Shawl Dance, the Buffalo-Grass dance and a ladies’ Traditional Dance, all accompanied by drum beat and vocables. As with the Mexica, a member of the Oneida Nation then stepped up to give the audience some background. He explained that most of these dances and songs are still performed throughout the year at powwows in the U.S. and Canada. Historically, powwows, a word that comes from the Algonquin language and means “gathering”, were places to trade and pass on stories. As most people at powwows did not speak the same language, it was the origin for the use of sign language. 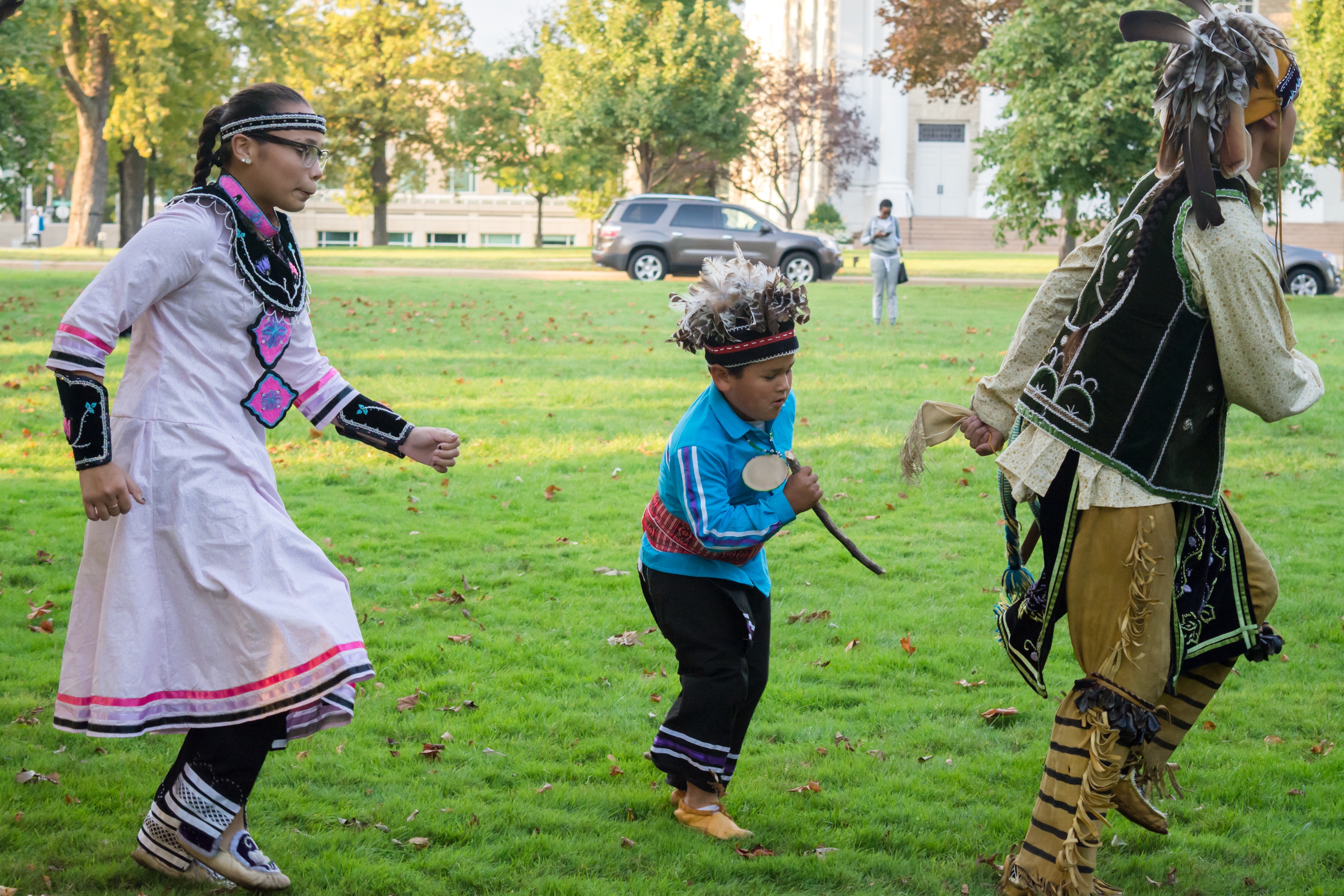 Members of the Oneida Nation of Wisconsin perform on Main Hall Green.
Photo by Emma Gilshannon

It is this culture of passing stories and traditions down through generations that explains why Native American culture continues to thrive despite huge, oppressive obstacles. Some of the songs performed by the Oneida Nation on Monday have existed for hundreds, even thousands of years. And yet, in the place of words, there are now only vocables, which are beautiful to hear, but have been violently stripped of meaning due to governmental fear that they could be used to rally Indigenous people against U.S. forces. A huge number of Indigenous languages are in danger of dying out and of joining the countless others that are already extinct. The Oneida reservation itself is only twenty-two percent of what it was in 1892 when the land was granted to the tribe.

However, there is hope. Over the last hundred years or so, Native American communities have painstakingly worked to write down scores of Indigenous languages and words are slowly being put back into the ancient songs. Many of the performers were boys and girls as young as seven years old, dressed in Oneida and other Native regalia.

The last dance of the evening was a Friendship Song where the group members reached out to audience members and encouraged them to join in. Everyone danced around the circle in groups of two, “getting to know each other,” until the drums and singing ended. The event was organized by the Lawrence University Native American Organization (LUNA), with help from the Committee on Diversity Affairs (CODA). Indigenous Peoples’ Day continues to increase in popularity all across the country since its inception in Berkeley, Calif. in 1992.

A member of the Oneida Nation of Wisconsin performs a traditional dance. Photo by Emma Gilshannon As an alternative to Columbus Day, Indigenous People’s Day was celebrated on the Main Hall Green on Monday. The event began with a cleansing ceremony conducted by the president of the Lawrence University Native American Organization (LUNA), senior Lauren…