On Sunday, Jan. 7, the New York City-based collective chamber ensemble known as Decoda gave a guest recital to conclude their four-day residency at Lawrence, during which they worked with student chamber ensembles at Björklunden. Subsets of the six musicians—duos, trios, and a quartet—played twelve pieces from various time periods, demonstrating many modes of performance and using the Lawrence Memorial Chapel space in surprising ways.

Two members of Decoda are Lawrence faculty: Associate Professor of Music Micheal Mizrahi, piano; and Associate Professor of Flute Erin Lesser, flutes and piccolo. The rest of the members, who travelled from other positions around the country, were: Catherine Gregory, flute; Alicia Lee, clarinet; Kris Saebo, double bass; and David Kaplan, piano.

Right away, several things told the audience that this would not be a typical performance. A trio comprised of Lesser, Lee, and Saebo played down from the balcony in the chapel at the audience, seated onstage. The piece was Saebo’s arrangement of J.S. Bach’s BWV 140, “Wake up, the voice calls to us,” in which the flute and clarinet sang the famous melodies to each other across the body of the double bass, who plucked a slow walking bass line. 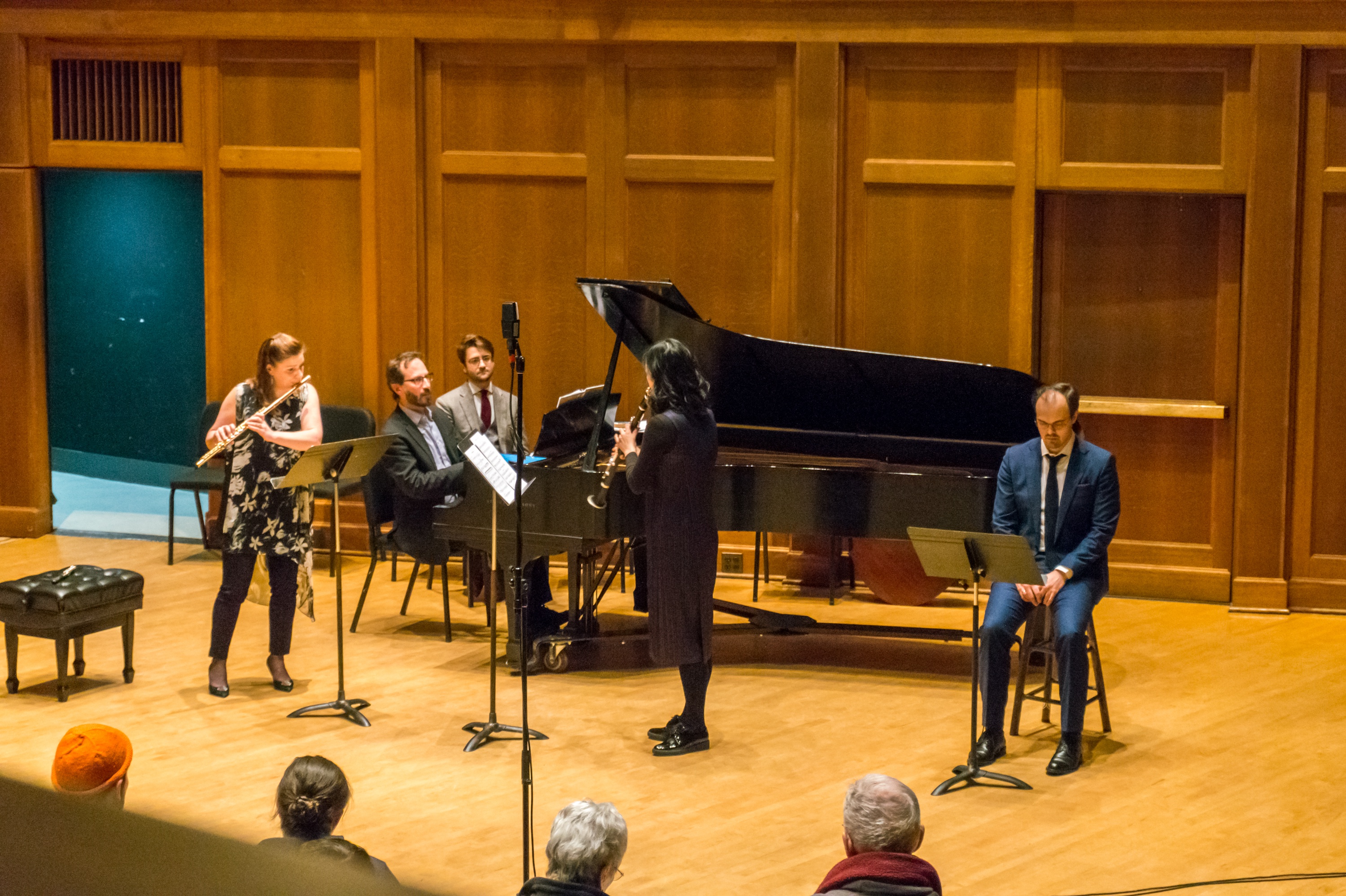 The concert program was built around an alternation between Bach arrangements and 20th century works. Most of the arrangements, made by Hungarian composer György Kurtág, were organ works rewritten for four-hands piano. Kurtág added high parallel melodic lines to simulate the overtones produced by an organ. While Mizrahi and Kaplan played them beautifully, the Bach works—all five of them—overstayed their welcome.

I appreciated the carefully planned symmetrical program, the alternation of new and old music, but I think the point could have come across in fewer than 12 pieces. Or, maybe, clearer connections between the two sides of the program could have better supported the type of structure Decoda wanted to present. Luckily, the pieces on the contemporary music side were strong enough to carry our interest to the end.

The most exciting pieces involved the two flutists, Lesser and Lee. In “Pathways,” composed by Efraín Amaya in 2009, the duo entered behind the audience, flanking them and stepping to the stage in time with the music. The concept of the piece was exemplified by the way the two parts exchanged voices: they traded melody and accompaniment roles frequently, often in the middle of phrases. Lesser and Lee displayed incredible virtuosity and sensitivity.

Another highlight was 1990’s “Vent,” a flute and piano duet by David Lang. David Kaplan said that the piece is meant to evoke technology and industry—that it makes him feel “trapped in a construction site.” Here, the flute and piano are joined together as a “hyperinstrument,” forgoing individuality as they respond to each other’s sounds. The mesmerizing texture of the piece was made of repeating notes and patterns of strike and decay. The “hyperinstrument” only functioned monophonically; thin harmony came from the piano’s sustain pedal. The duo remained locked in perfect sync as they took us on a tour of Kaplan’s imagined construction site. This is the type of music I most enjoy from Decoda.