Students and faculty who travelled to China over winter break.
Erty Seidel 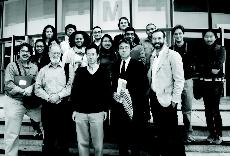 Tuesday, Feb. 16 students in the “Destination China” class offered last fall hosted a poster session to display the research projects that resulted from the class trip to China. Over winter break, these 12 Lawrence students traveled to China to try to understand water’s role in that country, as well as its economic effects.
The project focused on the Three Gorges Dam, a highly controversial project undertaken by the Chinese government during the last two decades.
The dam would reduce flooding of the Yangtze River, provide jobs to Chinese citizens, and produce copious amounts of electricity. However, the project would displace over one million people, and the creation of a lake behind the dam would be a strain on the local environment.
“Before our trip we had a really limited knowledge of China and the [Three Gorges] dam,” said Natasha Pugh, who attended the trip. “I thought it was a terrible idea.”
The Lawrentians met a young tour guide named Kelly, who explained that her family had been farmers on the land now covered by the lake.
One project discussed the propaganda distributed by the Chinese government and the locals’ perception of the dam based on that propaganda.
For example, Kelly gave different answers about her perceptions of the dam when asked by students of different ethnicities, sometimes relating her difficulties with the dam, and other times saying simply, “It’s all been positive outcome.”
Pugh felt that her perceptions of the dam changed, however. She said the trip convinced her that there was a necessity for the dam.
Fellow Lawrence traveler Tu Nghiem agrees the dam has been a long time coming. Flood control has always been an issue in China. There are three major rivers in China, and since ancient times it has been the government’s job to continuously build massive dikes to contain them.
In fact, the Chinese character for “govern” contains the radical for “water,” showing how important mastery of the rivers can be.
The Three Gorges Dam is a more permanent and measured solution to the flooding, and it is expected to last a lot longer than the constantly eroding dikes.
Perceptions of cheap water in China are also important. Due to low water tariffs and taxes, according to Lawrence student Van Do, Beijing is going to run out of water sometime in the next few years. The students discussed repercussions and solutions for this problem.
The trip was funded in part by the Henry Luce Foundation, which has a program specific to Asia. Professor Marty Finkler, chair of the economics department, led the trip. He said he plans to offer the course and trip every other year. 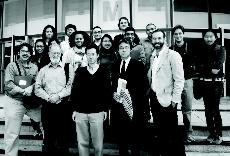