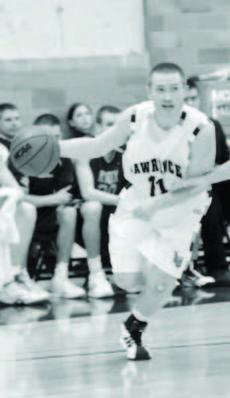 Madeline Steininger
Indoor TrackHow does it feel to break Lawrence’s high jump record?
It feels great, and pretty unexpected at this point in the season. I have been training hard, but didn’t anticipate performing so well this early.
What are the team goals for this season?
As with every team, we all hope to perform our best and improve every weekend. Our ultimate goal is to compete hard and have fun. We are striving to finish well as a team in our conference.
This being your senior season, what would you like to accomplish individually?
Being my last year to ever compete I would like to finish strong, qualify for nationals in both the indoor and outdoor competitions, and hopefully even place in the top five again.
What’s your favorite event?
I would have to say high jump. I have been competing since I was a little girl and have always had a love for the event, which was fostered hugely because of my dad. Because of his constant support and guidance I attribute a lot of my success to him!
How has the team dynamic changed with the introduction of a new coach?
The team chemistry has been great, we have a lot of new members, and are continuing to build the team for years to come. Coach Fast has been such a positive addition to our team, and his determination to build the program has been a driving motivation for us to do well!

What’s your pre-game ritual?
A nice nap followed by a long hot shower.
With only three conference games left this season, what are the team’s goals to finish the regular season on a good note?
Not only can we finish the season on a good note, we can finish it on a high one. We all know we are capable of getting to conference tournament and then getting to the national tournament.
What have been your favorite memories of your basketball career at Lawrence?
I have been a part of some very successful teams so it is hard to say just one. My freshman year beating Carroll on a buzzer beater was one of the best experiences I have ever had, but cutting the nets down in Grinnell after winning the conference tournament last year was awesome as well.
How have the roles of individuals on the team changed since last year? What impact have the freshmen had so far?
We obviously lost a lot of talent and scoring from last year’s squad, which has forced others to step up. Unfortunately our team has been a little plagued with injury this year which has allowed some of the younger guys to really grow. Tyler Crisman’s game has really grown over the course of the year. Conor Klusendorf has also stepped up and played some big minutes for us this year which most freshman do not get the chance to do. He is really athletic and I think he has a bright future here at LU.
Do you have a specific routine before a free throw? What is it?
I always dribble twice and look at the rim, take a deep breath and make sure I’m completely relaxed, then shoot. 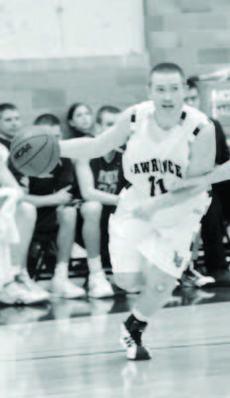