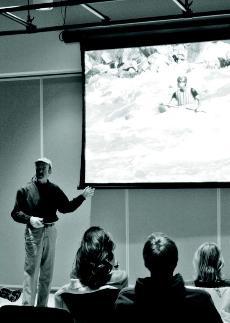 Kayak and boating enthusiast
Tim Cooper held a lecture in
the Warch Campus Center Feb. 22
about his experience as a river boat
guide in the Grand Canyon. He was
invited to campus by Dan Miles, a
member of the Outdoor Recreation
Club, as a guest speaker in the
group’s annual lecture series.
Tim Cooper started the talk by
detailing his early experience with
kayaking. At the time, kayaking
was not as popular a sport as it
is now. There was no technology
available, and most equipment was
old army surplus equipment. When
he first started, Cooper worked as
a kayak ranger in the Salmon River
in Idaho, which he described as
“the only paid kayaking job I have
ever known.”
He then explained how he started
his work in the Grand Canyon.
As a kayak enthusiast, he went
on a river trip with friends on the
Little Colorado River, one of the
main tributaries of the Colorado
River in Arizona. The experience
made him feel attached to the
Grand Canyon.
“It’s almost a spiritual thing,
because it really got a hold of me
the first time I went down there,”
Cooper said.
With slides of vivid images of
the Grand Canyon, Cooper unfolded
his 13 years of guiding experience.
He first started as a guide
with motor boats for two years.
Then he switched to dory boats
with oars.
Cooper told stories of boating
in the Colorado River, and then
showed the audience videos of
passengers on wooden dory boats
riding through the violent rapids.
Cooper says it is the thrilling
experience of overcoming these
natural challenges that captures
his interest.
Due to his experience and
enthusiasm, he was invited to play
a part in a National Geographic
documentary, which details the
exploration of the Colorado River
by Major John Powell in late 1869.
Later, Cooper opened a workshop
that repaired and built new dory
boats for use in rivers.
His most recent activity has
been accompanying scientific
research trips in the Colorado
River that study the impact flooding
from dams has had on the
hydrology and ecology of the
Grand Canyon.
River trips in the Grand Canyon
are often conducted in an average
of 20 days, with the shortest
about seven days in motor boats.
Helicopters normally airlift kayakers
out of the river once they have
reached their destinations. Shorter
one-day trips are offered, but they
usually do not capture the characteristics
of the Colorado River and
the Grand Canyon.
With the Grand Canyon as his
main interest, Cooper still maintains
his kayaking hobby in the offseason.
With more than 30 years of
experience, he has been kayaking
on most major rivers in the West
and some rivers in Canada. His
plan for the future is boating in
Alaska, the east coast and British
Columbia. 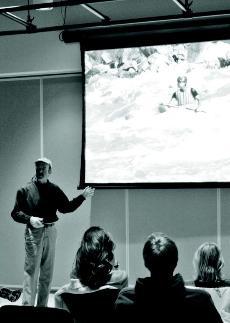